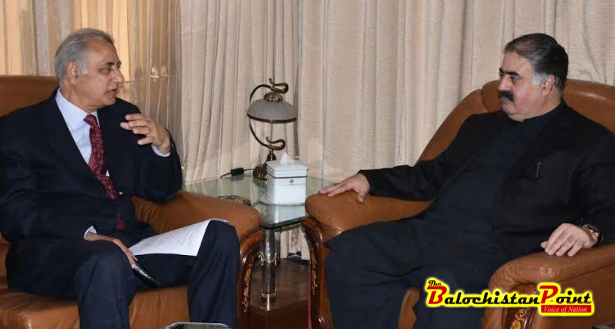 Quetta: Chief Minister Balochistan, Nawab Sanaullah Khan Zehri has said that following improvement of law and order, the economic and financial activities and investment is increasing in the province.

“Balochistan is not a poor province rather it has countless natural resources, minerals and a long coastal belt the further magnifies its importance”, he added.

Chief Minister Balochistan was talking to Governor State Bank Ashraf Mehmood Wathra who called on him here on Monday while heading a delegation comprising of high authority of private Banks.

Besides establishment of “Balochistan Bank” affairs related to promotion of economic and financial activities in the province were also discussed in the meeting.

Governor State Bank termed improvement of law and order a huge progress towards promotion of economic and financial activities in the province. He said that presidents and chief executive officers of all private banks were also accompanied by him and the main purpose of this visit was to enhance the capacity building of Balochistan regarding finance and promoting and growing banking sector in the province.

He said that to achieve this goal all banks were directed for evolving a three year long planning for establishment of more branches of all banks in the province. He said that to ensure provision of jobs to locals private banks were directed to impart training and give relaxation to local youth of Balochistan in education, adding that soon cash counters would be set up in Gwadar and Khuzdar. He informed that in order to provide banking facility to the far- flung areas of Balochistan Branchless Banking System was being introduced.

Chief Minister Nawab Sanaullah Khan Zehri lauding the steps of State Bank for providing more banking facilities to the people of Balochistan assured that provincial government would extend every possible support in this regard. “Establishment of Balochistan Bank is my dream and the cooperation of State Bank is inevitable to materialize this dream,” he said and added that Balochistan is almost half of Pakistan in terms of area wise, rich in mineral resources and luckily having a small population.

He said that if the resources of Balochistan were utilized in an honest and transparent way it would be the richest province of the country. If we provide jobs to 1000,00 youth then unemployment, poverty, backwardness and terrorism would be eliminated from Balochistan. “We have succeeded in reviving peace in the province following the sacrifices of security forces and cooperation of masses,” Chief Minister Balochistan said. “We have defeated those elements who were bunt upon making Pakistan and Balochistan like Iraq and Syria.”

Nawab Zehri said that he had sacrificed his children for Pakistan and would not hesitate in rendering sacrifices for the country in feature as well, and anti-state elements could not deter his courage and determination.

He said that the recent visit of Prime Minister to Gwadar and huge public gathering which was attended by thousands of people had proved that masses of Balochistan wanted peace and development  and now nobody could dare to spoil peace and play with lives of people.

Published in The Balochistan Point on March 20, 2017

2017-03-20
admin
Previous: Lawmakers pledged to increase budgetary allocations for Nutrition in Balochistan
Next: Child marriage as a violation of human rights