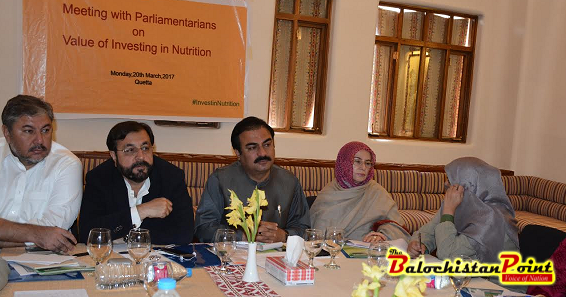 Lawmakers pledged to increase budgetary allocations for Nutrition in Balochistan

Quetta: Parliamentarians from different political parties made commitment to address malnutrition in Balochistan by increasing budgetary allocations for nutrition programs during a meeting organized by Provincial Nutrition Cell in collaboration of Scaling Up Nutrition Civil Society Alliance Pakistan (SUNCSA,Pak) in support of Micronutrient Initiative (MI).

Mr. Rahmat  Saleh Baloch, Minster Health said, “Government of Balochistan is really concerned about the issue of malnutrition. We have taken some good steps to scale up nutrition program in Balochistan which includes approval of multi-sectoral nutrition and allocation of resources through PC-1.” He directed health department to prepare new PC-1 to reach population of uncovered districts of province. He also proposed to establish a parliamentarians group that will work exclusively on the issue of malnutrition.

Eng. Zamurak Khan Achakzai, member provincial assembly said that they would invest in nutrition as it is crucial to achieve all development goals. “Rather focusing only on infrastructure development we should also invest on human development,” he added.

Dr. Ruqya Hashmai, chairman standing committee on health and population said, “We have approved Balochistan Protection and Promotion of Breastfeeding law and now we are in process developing its rule of business to ensure its implementation.”

All parliamentarians expressed their commitment to bring more investment in Nutrition. They were in view that they  should work together to improve the situation of malnutrition keeping away the political difference.  Meeting was also participated by different parliamentarians including Ms. Masooma Hayat, Ms. Yasmeen Lehri, Ms. Shaihida Rauaf Atta and Mr. Agha Raza.

While delivering the opening remarks Dr. Irshad Danish Program Manager SUNCSA,Pak shared  that parliamentarians can play an important role in addressing malnutrition in the province by allocation of financial resources and enactment of necessary legislation. He said, due to malnutrition Pakistan is losing total $7.6 billion annually which is nearly 3% of GDP. Pakistan cannot afford to sustain this drain on the economy. This is due to the estimated impact of malnutrition on learning, earning and health. Investing in ending malnutrition is one of the most cost-effective steps governments can take: every $1 invested in proven nutrition programs offer benefits worth $16, he added.

Earlier Dr. Ali Nasir Bugti, Provincial Coordinator Balochistan Nutrition Program shared overall situation of malnutrition in the province. He said, Balochistan is facing serious crisis of malnutrition which has not improved past few decades. He said, 52% children are stunned in Balochistan while 16.1% children suffering with wasting.  He explained that poverty is not the only reason behind child malnutrition in the country. There is a strong relationship between fertility, disease burden and practices such as hand washing, feeding practices especially exclusive breastfeeding.

Published in The Balochistan Point on March 20, 2017

2017-03-20
admin
Previous: Pak and Iran ties in light of Baluchistan
Next: Improved law and order is increasing financial activities in the province, says CM Balochistan