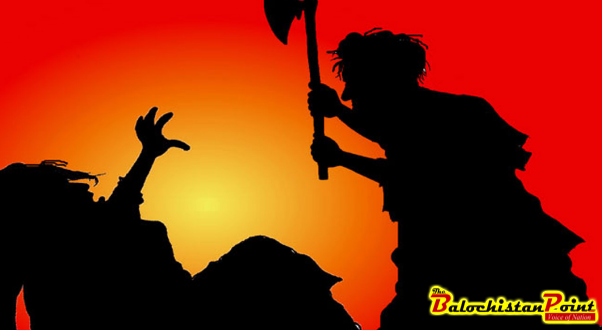 The city of Kalat, although mourning for years, drowned in deep grief this past month when a couple was allegedly killed in the name of honor. Although, it was not the first incident that people of Kalat experienced, yet it was tragic as the incident took place three kilometers away from Kalat city, in Azizabad, a village in the East of the Royal Palace of Khan of Kalat. It is alarming as the government has badly failed to maintain law and order in the city. Moreover, most of the honor killings are reportedly because of personal enmity and revenges.

If everyone is allowed to kill then what remains for Judiciary and administration.  Such deaths on the name of honor are maculating the honors of state and society. The violence rules there where the law becomes victim. Moreover, the life becomes cheaper and loses its values if there is no margin of law.

If the Society does  not awake and state does  not make his strength active, we may deal with death of our own well-wishers to save our honors. Such dirty games have become the fortune of tribal and brutal areas not only to kill for honor but also self-revenges are associated with this blame. The called slogan of honor which is only attempted for neglecting the societal crisis.

A society may not conceal its dark aspect like gender discrimination bargaining of relation and the ancient violence by the name of tradition through the murders. The moderation of society has replaced the stone ages, obvious with lesson of violence. Though globalization of the current world has relinquished the sovereignty of human or the concept might is right, yet we are lying in this thorny phase of society. In a nut shell, the time has come for the society and state to realize their values and provide us an free atmosphere to breathe in.

Published in The Balochistan Point on January 29, 2018

2018-01-29
admin
Previous: CPEC will provide number of opportunities to our people: CM Bizenjo
Next: How flowers of our gardens are destroyed by rapists