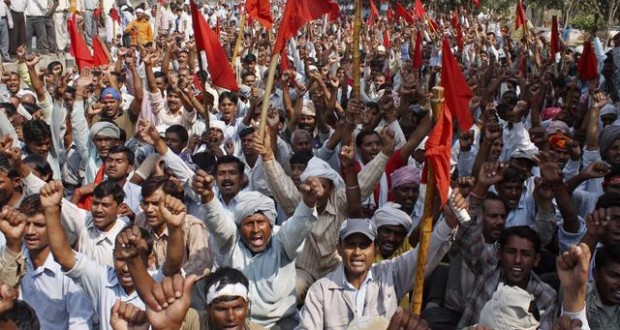 The patterns of social and economic development in India are so uneven that the country can be presented as a museum of historical materialism. Housing about twenty percent of world’s population, India hosts more than forty percent of its poverty. At the same time, it was the largest buyer of arms from the military industrial complexes around the world in 2012

Once the American ambassador to India, in the Kennedy years (1961-63), John Kenneth Galbraith called India, “a functioning anarchy”. He considered India “the most organised chaos in the world.” In the subsequent years, Indian anarchy and chaos has intensified. Presently, this anarchy is reaching its zenith. While the high economic growth rates of the last decades have floundered; the social conflicts as well as ethnic violence and communal strife are tearing apart the social fabric of India. All the macroeconomic indicators are in a roller coaster decline. The growth rate has more than halved and the rupee is rapidly losing value.

An essayist in the Asian Age says: “Reserve Bank Tuesday cautioned that rupee depreciation will have adverse impact on prices of fuel and manufactured products in the coming months even as it aims to keep inflation at five per cent by March end.The stronger than expected monsoon has not yet softened food inflation as much as it should have and in particular, vegetable prices have been impacted by weather-driven supply disruptions, said RBI governor D. Subbarao while unveiling the first quarter monetary policy review. While the outlook for global non-oil commodity prices remains benign, international crude oil prices are firming up.”

Event before the economy plunged, the growth rate failed to lift the teeming millions out of poverty. According to Kuldip Nayyar, during the decade [2000-2010] of double digit growth rates the poverty increased. The figure of 770 million living below the poverty line [Rs 20 per day] has gone up to 836 million. In the last couple of decades, India’s middle class has expanded substantially. But with the world economic crash since 2008, with declining exports to the advanced capitalist countries and contracting investments by the imperialist corporate firms, the middle class is now witnessing the dark side of the ‘shining’ India. This middle class has been the bastion of Hindu fundamentalism since the mid-1980s.

The present Congress government is drenched in corruption scandals while all its efforts to prop up the growth rates are failing. In the recent period, splits in the main opposition party, the BJP, have also occurred as L.K. Advani abdicated. The corporate capital is Narindera Modi as the possible new prime minister post-2014.

The support by Indian conglomerate [from the Tatas to the Ambanis] is not really for Modi’s fundamentalist credentials but the harsh manner in which he crushed the strikes and the labour struggles in Gujarat.

The reality of Gujarat being a shining example of economic success was recently challenged in an article by Kavita Krishnan run by Countercurrents: “What, if anything, is special about the development model of Gujarat under Modi? Gujarat’s neoliberal development model has displayed all the distressing effects on people’s lives and the economy that have been felt in the rest of the country. Gujarat’s social indicators too tell the same sorry story that has marked the neoliberal model in the rest of India. Jobless growth has been the norm. In Education, health and nutrition indicators are dismal, especially for women and children. In the Global Hunger index, Gujarat is part of the bottom 5 states in India, and globally, performs worse even than states like Haiti. 80% of children below 4 years and 60% of pregnant women are anemic in Gujarat (a virtual anemia epidemic that Modi laughs off as a case of ‘beauty conscious girls’ starving themselves!).What about corruption and corporate plunder? The ‘Modi model’ is no different in its economic essentials than the Manmohan model. Why, then, is Gujarat a preferred destination for the corporations? The state witnessed not merely jobless growth but also the lowest share of wage income, highest use of contract workers in industry. Not surprisingly, Gujarat witnessed the maximum incidences of strikes, lockouts and other forms of unrest on various financial and disciplinary grounds (wage and allowances, bonus, personnel, discipline and violence) at a time when these were actually declining in the rest of the country.”

In India the opiate of the petit bourgeois is a fine blend of nationalism, cricket, and democracy. Corruption is not only rife but has become a social and cultural norm in India. A secular constitution notwithstanding, India has one of the highest numbers of people killed in the world in the religious and sectarian violence. Dozens of parliamentarians have been accused of crimes like gang rape and murder while the corrupt judicial system fails to take an action.

The patterns of social and economic development are so uneven that the country can be presented as a museum of historical materialism. Housing about twenty percent of world’s population, India hosts more than forty percent of its poverty. At the same time, it was the largest buyer of arms from the military industrial complexes around the world in 2012.

If the Congress-led coalition government has been a disaster, a BJP-led government will be an even greater disaster. The reality is that despite a huge market at its disposal and tax holidays, the Indian bourgeoisie has failed to complete any of the tasks of the national democratic revolution. They are unlikely to achieve it even in future. India has a strong proletariat with glorious traditions of class struggle. They fought many battles, pulled of numerous successful general strikes and proved more than once their capability of waging a revolutionary struggle but were betrayed by their trade union and Communist leaderships. India’s communist parties are some of the largest in the world with millions of members. But the policies of the leaders practicing two-stage theory and their fetish of what Lenin called parliamentary cretinism they failed to give a revolutionary leadership and programme to the Indian workers and the youth.

On September 9, 1928, addressing a clandestine meeting of the revolutionaries from all over India in the ruins outside Lahore, the iconic revolutionary of the subcontinent Bhagat Singh said what has been vindicated by history. “We don’t want Independence! We don’t want an independence where brown bosses replace the white sahibs and the system of exploitation and coercion continues to ravage society. We ant and independence which over throws this despotic system through a revolution” (1).

That task still remains to be achieved.

Lal Khan is the editor of Asian Marxist Review and International Secretary of Pakistan Trade Union Defence Campaign. He can be reached at ptudc@hotmail.com