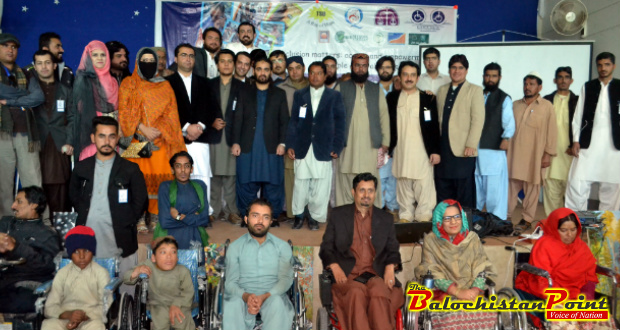 International Day of Persons with Disabilities Celebrated in Quetta

Quetta – International day of persons with disabilities was celebrated by Quetta Online group of volunteers, on Thursday.

Quetta Online with support of Dost organization, Host organization and TSO celebrated the day by arranging a program with title of “Break Barriers, Open Door” in Boy’s Scouts Association Hall in Quetta.

United Nations has designated December 3rd as International day of persons with disabilities and theme for this year is Inclusion matters: access and empowerment for people of all abilities.

Khalid Langau, advisor of Chief Minister Balochistan on Finance, was the chief guest of the program.

Advisor of CM announced that In Kalat district a government hospital is under construction which will have a ramp to facilitate the entry of persons with disabilities.

Mr. Langau claimed that Finance department is fulfilling the quota reserved for persons with disabilities.

At the end of his speech, Mr. Langau announced donation of Rs. 10 million for all four organizations who had organized the program.

He also announced donation of Rs. 2 million for the 13 year old blood cancer patient Hajira. Case of Hajira was brought to the attention of Mr. Langau by Civil Society Balochistan.

Zia Khan, Founder of Quetta Online group delivered a detailed presentation about the activities of his group. “We are playing our role in socially connecting people and promoting talent using social media,” said Mr. Khan.

Elaborating the role of Quetta Online Group, Zia Khan said that this organization provides wheel chairs to people with disabilities with the help of Bait-ul-Maal.

“There is a national level policy for people with disabilities but its not implemented,” lamented Riaz Baloch of TSO.

He further added, “There is no way people with disabilities can reach that office due to lack of required facilities.”

Sami Zarkoon, Convener of Civil Society Balochistan, also addressed the program. He said that people with disabilities are part of our society and have accomplished a lot despite their disabilities.

Others who addressed the program include Presidential award winner Shazia Batool, Fozia Luni and Beebarg Baloch.

Large number of people from different walks of life attended the program and appreciated the person with disabilities who organized it.

In the end Students of Educators presented a Tableau and paintings of Shazia Batool and books of Faris Mughal were presented in the program.

Published in The Balochistan Point on December 4, 2015