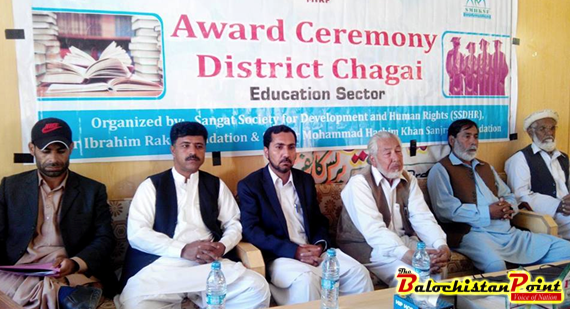 Dalbandin:  The International Volunteer Day (IVD) mandated by the UN General Assembly, is held each year on 5th of December. It is viewed as a unique chance for volunteers and organizations to celebrate their efforts, to share their values, and to promote their work among their communities, non-governmental organizations (NGOs), government authorities and the private sector.

\They emphasized that government particularly social welfare department should celebrate this day and grant awards to volunteers of different sectors.

Janziab and Mohammad Waseem, the students of Azat Foundation Public School Dalbandin highlighted the importance of education and the relation between education and volunteerism in their speeches at the beginning of the program and received overwhelming appreciation from the speakers and audience.

The speakers’ appreciated hard work of the toppers at district level in 5th, 8th, 9th and 10th Classes and for securing the first position in their respective classes. The First positions holders were given Awards (Shields) and Cash prized from Sangat Society (SSDHR), Mir Ibrahim Reki Foundation (MIRF) & SardarHashim Khan Sanjrani Foundation (SMHKSF) to appreciate them and encourage other students to work hard.

A large number of social and political activists attended the program and assured continuation of their volunteer works regardless of any reward.

Published in The Balochistan Point on December 5, 2016