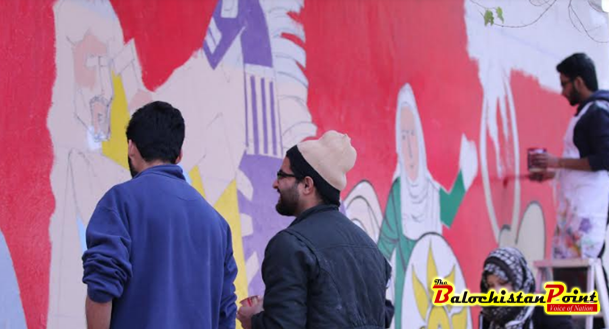 Six artists participated under the president ship of Sabir Nazar, a well known cartoonist. The purpose of the painting was to show the positive image of Pakistan to the world and convey the message through wall paintings.

The students and art lovers expressed their love and interests towards the paintings.On the occasion the cartoonist Sabir Nazar said the purpose of holding  the Wall painting is to show a positive image of Pakistan to the world through this.He said those who are not literate can better understand the language of art.

He said our wish is to bring the art in public which had been put in gallery before.We want to build a good relationship between artists and public. He claimed to promote the  artists to express their arts.

Number of people had come to see the art exhibition. People on the occasions called the exhibition a positive approach and applauded the step.

Published in The Balochistan Point on January 23, 2017

2017-01-23
admin
Previous: Letter: Water crisis in Gwadar
Next: Letter: Cheating, a root cause for downfall in education