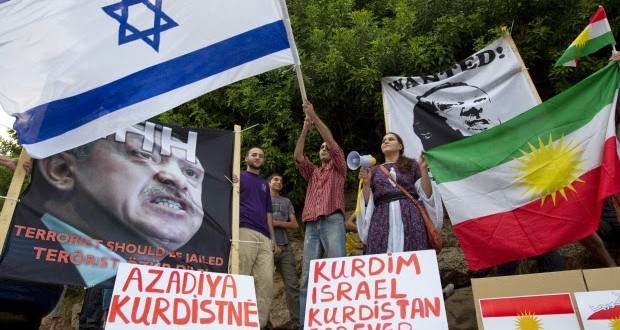 The Prime Minister of Israel Benjamin Netanyahu few days ago expressed his support for the creation of a fully Independent Kurdistan in Northern Iraq. It is said that before the statement of Netanyahu, some  Israeli cabinet ministers met Kurdish leaders. After the meeting, Mr.Netanyahu openly favored the creation of Kurdish statehood in northern Iraq by saying “We should support the Kurdish aspiration for independence, Kurds is a nation of fighters who have proved political commitment and are worthy of independence.” There can be sundry reasons for Isreali PM Support for Free Kurdistan.

The prime factor might be the rise of Sunni militant organization ISIS in Iraq, which has flabbergasted many by their fighting strength. They are fighting with the ambition to capture whole Iraq and if they do so, then Israel has reasons to worry. It is already not short of perilous foes like Syria, Iran, HAMAS and Hezbullah. The victory of ISIS, which believes in the caliphate system, will create another rival for Israel. With coming of ISIS in power in Iraq, it can become the base for Al-Qaeda fighters who can any time turn their guns against the Israel.

The secular sovereign Kurdistan is the only hope for Israel to contain the influence of ISIS. Kurd is a martial race and they have a long history of fighting much stronger opponents. In the medieval period, they have resisted the entire foreign invasion and fought mighty imperial powers .Over the years, they have been courageously fighting against the powerful states like Turkey, Iran, Syria and Iraq. These states have resorted to brutal use to use of force to suppress the Kurdish movement, but they have failed to do so. Not surprisingly, they are now battling and resisting the militants of ISIS.

Many believe that the motive behind the Israel’s support of Free Kurdistan is to find a ally in the region. But, the alliance of Kurds and Jews is centuries old. During the reign of Ottoman Empire, they had cordial relations. The Ottoman Empire always used the Jews to meditate between ottoman rulers and insurgent tribal Kurds. This symbolizes the trust between them. Iran and Syria have accused the president of Iraqi Kurdistan of having contact with Israel and Mr Masood. Barzani, the President of Iraqi Kurdistan didn’t deny it he said” establishing relations between Kurds and Israel is not a crime since many Arab countries have ties with the Jewish state.”

Apart from political alliance, there is also a genetic bond between Kurds and Jews A team of German, Indian and Israeli specialists published the result of their research that proved Kurds and Jews belong to the same ethnicity. Thus, the alliance of Israel and Kurds is not a new phenomenon, it is an old one. However, Mr. Netanyahu will be criticized for his statement, especially by those countries, whom, interests are contrary to the creation of Independent Kurdistan like Turkey, Iran, Syria and even Pakistan.

Kurd is nation without a country. The land of Kurds is divided into four countries, Turkey, Iran, Syria and Iraq. The Kurds of the four countries never had harmonious relations with the governments of these countries. They have never given up their dream of United or Greater Kurdistan, which comprises the Kurdistan of all the four countries.

Turkey’s major concern about Independent Kurdistan in Iraq will be that, it will motivate Kurds of Turkey. As the rebel Kurds of Turkey will find safe havens in the Independent State and they will launch their strike from there to Turkey. The Kurd uprising has already proved to be very costly for Turkey. It has affected her tourism industry, owing to human right abuses in Turkish Kurdistan; it has not been given the status of permanent membership of European Union.

Iran and Syria have reservation on Free Kurdistan. The liberal Sunni Kurds are living as second class citizen in a theocratic Shia State Iran. The Kurds of Iran are hostile to the government and they have carried out their armed resistance against the state forces. Iran fears that Free Kurdistan can become a base for Irani Kurds. Syria also has the same concern.

Last, but not least, the sole nuclear power of the Islamic World, Pakistan will not like creation of Independent Kurdistan. There are two reasons for this. Firstly, Pakistan has a history of supporting the governments against the rebellion movements. For instance, supporting the Srilankan government in crushing the menace of Tamil Tigers. It has always helped Middle Eastern monarchs in suppressing the civil uprisings. Secondly, Pakistan worry that Free Kurdistan can create more unrest in her restive province Balochistan. Baloch are the first cousins of Kurds. Despite the fact that Balochs and Kurds live in two different regions, the spirit of brotherhood exist between the two nations. Historians of both the nations have kept alive the ethnic unity. Social Media have brought them more closer. Balochs and Kurds have expressed solidarity with one another through various sites on Social Media.

Pakistan will feel insecure that Free Kurdistan can become the second home of Baloch separatists and they will find safe havens there. The same concern will be share by Iran because Iranian Balochistan has been a source of constant problems for the state, where groups like Jaish e Adl and Jundullah have been involved in kidnapping and killing of State forces.

The statement of Israeli PM should be extolled on humanitarian point of view because Kurds have been victim of barbaric use of force in different countries. But, the Free Kurdistan only in northern Iraq is not the final solution. Kurds of other three countries will again suffer from brutal use of force. Free Kurdistan will create more anarchy and unrest in and outside the region. The result will be more bloodshed and chaos. It is time for the super powers like USA and UK and more importantly UN, to settle the long dispute of Kurdistan in a peaceful way, which should be in accordance with the International Law.

Writer is an Assistant Editor of Daily Intekhab, Quetta and Blogs at www.jeeyand.blogspot.com

Published in The Balochistan Point on July 26, 2014