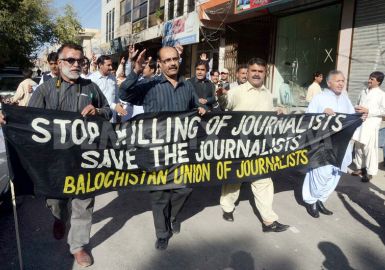 Journalists protest against killing of their colleagues

I have been working as a journalist for the past seven years, and every year, I hear about the death of my fellow journalists in Pakistan. It really pinches me thinking about the fact that I am here, all safe doing whatever I wish to, but my people are not safe. I’m tired of this violence, I’m tired of the pain I feel and still can’t help it. I’m tired of being on the road, lonely as a robin in the rain. I want to run away from all this, but will it bring a change in my society? I’m tired of people being ugly to each other. It aches like pieces of glass in my body; it feels like scars on the soul of humanity. I’m tired of all the times I’ve wanted to help and couldn’t. I want to do something at least that would bring a little hope to people who lost their families, their friends, their whole lives and have been torn apart in just a second. I’m tired of being in the dark of this ruthless war of injustice. Mostly it’s all about the pain. There’s too much that words can’t explain. If I could end it, I would have, but there is no hope for humanity. I wonder what can relieve these people, what can change their fate.

On August 28, gunmen barged into the office of he Online News Agency and killed its Bureau Chief Irshad Mastoi, Reporter Abdul Rasool and Accountant Muhammad Younas. Since then the Press Clubs across Baluchistan, like elsewhere in Pakistan, remained closed to protest against what journalists describe as the inability of law enforcing agencies to trace the murderers of senior journalist Irshad Matoi and his two colleagues who were gunned down inside their office.

The police and law enforcing agencies have so far failed to find any clue regarding the killings. Baluchistan Union of Journalists (BUJ) demanded the government announce compensation for the grieving families of the journalists who were brutally murdered in Baluchistan. Again, my question is, will this thing stop the killers from killing the innocent people, or will it bring their loved ones back to life? No, it will do nothing. Instead of giving them money, why don’t they have a better law and order system, which will stop people from killing others. Why don’t they pass such laws which will stop the terrorists from spreading violence in my country? Why can’t we live in peace like other countries?

The President of BUJ, Irfan Saeed, says that journalists will observe a hunger strike, if there is no progress in investigation. “This is a serious issue and we will not give up until the culprits are arrested,” Saeed said.

President of Quetta Press Club, Raza Ur Rehman said the recent killings have sent a shockwave among the journalists who are now working under immense fear. “This culture of impunity should end now. Law enforcers should expedite investigation and trace the culprits. We will not further tolerate any negligence on the part of law enforcing agencies,” he said. Senior Journalist Shahzada Zulfiqar quoted that journalists are on protest for the unending targeted killings of their colleagues. This is the first time when I have seen such unity in them. I wish they would have learned this lesson the easier way, but I guess sometimes, it better to learn it the other way around.

BUJ announced that in the next phase, the journalists will observe hunger strike to put pressure on law enforcers to fulfill their responsibility and this statement was given last week. Until now, there has been no progress, so I am afraid they will definitely start their hunger strike. I just hope and wish that the government will take notice of this and will help them out. My country bleeds again and I mourn, I mourn for its fate, its destiny, and its people.

Published in The Balochistan Point on September 20, 2014