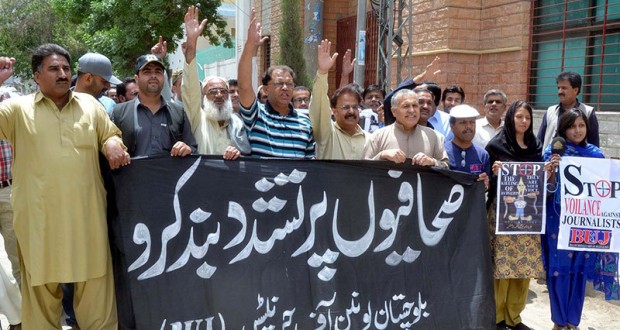 Journalists protest against murder of their colleague

Quetta: Journalists in Quetta marched on different roads, on Sunday evening, to protest the killing of 3 media personnel.

The march of journalists started from Quetta press club and then it turned into a protest rally. After passing through different roads the march ended at Governor House chowk.

The protestors demanded that the culprits behind the murder of Irshad Mastoi and his colleagues should be arrested. The protestors lamented the failure of security agencies in hunting down the groups which kill journalists in Balochistan.

President of Balochistan Union of Journalists (BUJ), Irfan Saeed, said that the protests will be intensified if the perpetrators of the murder of journalists are not arrested.

“Impunity is a major contributing factor in the killing of journalists” said Senior Journalist Shehzada Zulfiqar. The journalist community can go to any extent to pursue justice, added Mr. Zulfiqar.

Journalist community of Balochistan has decided to boycott all government functions and also to intensify the protest against apathy of government about murder of journalists.

Published in The Balochistan Point on August 31, 2014.

2014-08-31
Editor
Previous: Showdown in Islamabad
Next: Journalists protest in Karachi against murder of colleagues in Quetta