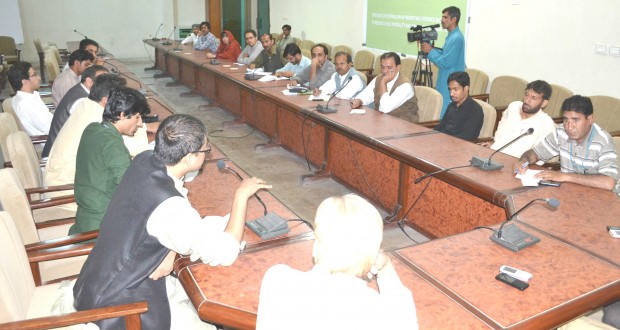 Journalists underline need for code of ethics for health reporting

Quetta:  Editors, bureau chiefs of different tv channels and reporters from print and electronic media participated in a consultation workshop organized by Mishal at Quetta Press Club on August 21, 2013.

Speakers underlined the need for code of ethics for health reporting in consultation with senior journalists. Journalists spoke at length about nutrition, immunization and lady health workers issues in Balochistan.

President Quetta Press Club, Raza-ur-Rehman presided over the consultancy workshop. The journalists emphasized the need that proper code of ethics should be framed in consultation with senior media men while reporting health issues.

Addressing the participants, Raza ur Rehman said journalists in Balochistan do report social issues including health and education besides targeted killings, bombings and rocketing. “Despite all odds, we report health issues”, he said.  Saleem Shahid, a senior journalist said that health sector was in miserable condition and people were deprived of basic health facilities in Balochistan. He said journalists need to be sensitized regarding health reporting and they should be encouraged to work for the improvement of health sector.

Journalists who had visited Loralai shared their experience and information with Quetta based journalists during the workshop. Bari Baloch, a senior journalist informed the participants that there was lack of coordination between donor agencies and government departments. He said the officials were not available to speak on the plight of hospitals in Loralai town.

Hafeez ullah Sherani informed that there was clear gulf between government departments and nongovernmental organizations. He said despite tiresome wait, the journalists could not meet the high officials to get their opinion on health issues.

The journalists also gave their input and expressed the determination that all out efforts would be made to work with Mishal for improvement of health facilities in far flung areas of Balochistan.  Mishal representative, Asif Farooqui and journalist Syed Ali Shah also spoke on the occasion.