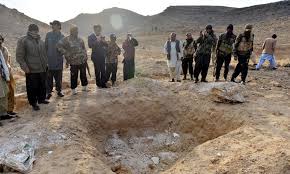 According to Akbar Hussain Durrani, the Home Secretary Balochistan, a report by the judicial commission probing mass grave incidents in Balochistan’s Khuzdar districts has been submitted. The head of commission Justice Noor Muhammad Muskanzai submitted the report, containing statements from 57 individuals.

This commission was formed soon after when in late January 2014, a shepherd had spotted a mass grave in Khuzdar’s Tutak, one of the restive districts of Balochistan. The grave contained a large number of bodies, which were decomposed and beyond recognition. The government officials claimed 17 dead bodies; However, Baloch nationalists put the figure higher.

Over the recovery of mass graves the Asian Human Rights Commission (AHRC), in its report said that at least one hundred dead bodies had been found from these mass graves, who were completely decomposed. The AHRC expressed concern that bodies were of the Baloch boys who had gone missing since the dictatorial days of General Pervez Musharraf. While thousands of Baloch were still reported missing, hundreds of bullet-riddled dead bodies of these missing persons were found in different parts of Balochistan after Musharraf’s departure from power.

Human rights organizations, Baloch nationalists, political parties and civil society still criticize the incident and dispute with the number of dead bodies claimed by the government. Nasrullah Baloch, chairman of the Voice for Baloch Missing Persons (VBMP), fears that the bodies in mass graves could be Baloch missing persons allegedly kidnapped by security forces from different areas of Balochistan.

Mama Qadeer Baloch, vice chairman of the Voice for Baloch Missing Persons, states that the number of dead bodies found in mass graves in Khuzdar is more than 165. Previously, Mama Qadeer Baloch led a long march for the recovery of Baloch missing persons. According to Qadeer Baloch approximately 1,500 persons were killed and more than 18,000 were missing from Balochistan including 170 females and 169 children.

The Home and Tribal Affairs Department recently shared that over 800 bodies were found in Balochistan during last three-and-a-half years, with most of them being found in Quetta, Khuzdar and Makran belt.

The people in Balochistan are eager to know about the facts regarding mass graves in their land. However, according to the Home Department they could not make the report public at this point in time and it would be made public after the arrival of Abdul Malik Baloch, chief minister Balochistan.

The people of Balochistan, human rights organizations and media, should know the reality about “abduct, kill and dump” of Baloch youth and mass graves because the only two dead bodies from mass graves were identified who were abducted Baloch, which has worried relatives of Baloch missing persons.

In the last years hundreds of dead bodies of Baloch doctors, teachers, lawyers, student leaders, intellectuals and journalists have been found, whose extra judicial murder is a great loss for the Baloch nation. If the report is made public regarding mass graves, somehow, it will be great moral support to the people of Balochistan and may create confidence building measures between Islamabad and alienated Baloch.

Mir Behram Baloch  is Bureau Chief of The Balochistan Point in Quetta.

Published in The Balochistan point on July 16th, 2014