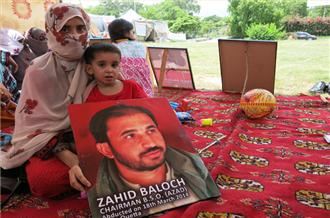 Islamabad, Pakistan – Sitting in a tent outside the Islamabad Press Club, in the baking heat of the Punjab summer, Zerjan Baloch awaits justice.

Not that she expects to receive it, she says.

On March 18, witnesses said a group of armed men in paramilitary uniforms and others in plainclothes apprehended Zahid Baloch, Zerjan’s husband, in the southwestern city of Quetta, the capital of Balochistan province.

According to witnesses, the men did not have a warrant for Zahid’s arrest, nor for a search of the premises where he was staying. They blindfolded him, tied his hands behind his back and shoved him into a car.

The 29-year-old’s apparent crime was assuming the leadership role of the Baloch Students Organisation-Azad (BSO-A), a group that advocates for the rights of ethnic Baloch, and that has been associated with a secessionist movement in the province.

“My only appeal to the world is that he should be presented in court,” Zerjan told Al Jazeera, adding that at first the authorities refused even to register a missing person’s report, since the powerful security forces were being accused of the crime. “Whatever he has done, give him the punishment there. Making someone disappear like this, and putting his whole family through misery – what justice is this?”

Zerjan has been working through existing Baloch rights organisations, such as the Baloch Human Rights Organisation (BHRO) and the Voice of Baloch Missing Persons (VBMP), to pursue a legal case tracing her husband’s whereabouts. The VBMP has registered at least 2,918 cases of people who have gone missing in Balochistan, allegedly picked up by security services. Some have been missing for years, while others have been found – but usually only as dead bodies in mass graves or dumped by the side of the road, said Nasrullah Baloch, VBMP’s chairman.

The Pakistani Supreme Court is currently hearing cases related to missing persons – from Balochistan and elsewhere – and a commission of inquiry set up by the court said there are currently 1,338 such cases pending across the country.

On Friday, Pakistani President Mamnoon Hussain signed into law the Protection of Pakistan Act  (PPA), a powerful new law that provides Pakistan’s law enforcement agencies and military overarching powers in cases pertaining to “war or insurrection against Pakistan” or “acts threatening the security of Pakistan”.

The act reverses the burden of proof in these cases, deeming suspects to be guilty until proven innocent. It also provides legal cover for law enforcement and soldiers to shoot suspects on sight, while establishing parallel courts with limited rights of appeal.

Perhaps most tellingly for activists advocating for the disappeared, it allows for “preventive detention” for a period of up to 90 days, without the need for warrants or court orders. It also suspends citizens’ right to habeas corpus, a legal term meaning a court’s right to demand that the accused be presented in court. It does this while limiting appellate courts’ access to evidence against those accused under the Protection of Pakistan Act.

The law, passed on July 2 but effectively in force as an ordinance since January 22, was passed with retroactive applicability, meaning all acts perpetrated by security agencies that now fall under its purview can be considered to have always been legal.

Terming the law “a cruelty and an injustice”, Nasrullah Baloch said: “It is clear that the law has only been passed to give [legal] cover to the intelligence agencies which have been [disappearing people]”.

“Constitutions and laws are equal for all people, whether they are citizens or generals. When the PPA is being brought, it means that we have no recourse to justice and that no one can be held accountable for what has been done,” he told Al Jazeera.

‘The country is bleeding’

The government argues that the PPA is needed to effectively combat terrorism and to ensure quick trials and convictions for terrorism suspects, and that the already overloaded regular courts cannot be expected to deliver verdicts in these cases.

“The country is bleeding,” said Abdul Qadir Baloch, a senior member of Pakistan’s ruling PML-N party and the federal minister for states and frontier regions. “We need to protect the lives and property of our people, and this needs a protective law.”

Criminal lawyers and rights activists, however, told Al Jazeera that the new law could allow authorities to whitewash existing practices – whether in Balochistan or elsewhere.

“This law is basically just giving them all the ammunition to actually do the things they were already doing. They have just legally justified them,” said Hamza Haider, a Lahore-based lawyer with the Justice Project Pakistan (JPP) rights organisation, referring to documented cases of illegal detentions and torture and other abuses.

Mustafa Qadri, a Pakistan researcher at Amnesty International, agrees with that view. He pointed to a similar piece of legislation, the Action (in Aid of Civil Power) Regulation 2011, which applies to Pakistan’s tribal areas, where groups such as the Tehreek-e-Taliban Pakistan (TTP) and its allies are based.

“[That law] has had a similar effect, according to Amnesty’s detailed research. It has given a legal cover to the military to commit extrajudicial executions, arbitrary arrest, torture, and other abuses beyond the reach of the courts. These laws effectively embed impunity, maintaining a cycle of violence rather than moving Pakistan society towards greater rule of law.”

Established in 1997, ostensibly to create a more efficient parallel court system, the conviction rates in these anti-terrorism courts hover between 25 and 40 percent. They are also often used by police in non-terrorism cases – such as kidnapping for ransom or murder cases – in order to secure non-bailable warrants or sentences, according to lawyers. There are currently more than 17,000 pending cases under the ATA.

Political activists say existing laws have often been used to justify police excesses or to secure quick convictions against them, rather than those suspected of being members of the TTP or the numerous religious, sectarian and other armed groups operating in Pakistan.

Farooq Tariq, a prominent labour activist with decades of experience, said the Anti-Terrorism Act has “frequently been used by police, because it means there is no immediate bail”.

Tariq has himself been arrested under the ATA, while at an anti-government demonstration in 2007, and pointed to the cases of several other labour activists – most prominent among them the ” Faisalabad Six “, who were detained under such laws.

Existing preventive detention laws have also been used in arbitrary and opaque ways by the government to detain terrorism suspects, including those who have been released from US detention at Afghanistan’s Bagram airbase, said Haider, whose firm represents several of those detainees.

‘It is in order to subjugate us’

The Human Rights Commission of Pakistan (HRCP) and US-based Human Rights Watch have also condemned the new law, with HRCP terming it “a blatant attack on the fundamental rights of the people”.

“If you look at the law enforcement agencies of Pakistan, there are cases of torture and extrajudicial killings that were there even prior to the PPA. [The PPA] will legalise a lot of activities that were considered illegal which were happening,” said Zohra Yusuf, chairperson of the HRCP, adding that her organisation had documented more than 350 cases of extrajudicial killings by the police under the law (then an ordinance) since January.

Moreover, Qadri, the researcher at Amnesty, said such security laws are ineffective at combating terrorism.

“These laws do not address the failure of successive security authorities to dismantle militant networks and infrastructure, or tackle the ideologies freely spouted in the education system, media and places of worship that create the conditions within which extremism can flourish,” he said.

Meanwhile, Nasrullah Baloch, who said he continues to receive threatening phone calls for his work advocating for the disappeared, is concerned that the PPA will be used against advocates, not terrorists.

“This law is going to be used to silence people like us, who are working according to the constitution and law,” he said. “It is in order to subjugate us and silence us.” (Courtesy: Al Jazeera )

Republished in The Balochistan Point on July 16, 2014

2014-07-16
Editor
Previous: Unjust increase in Fees of University of Balochistan
Next: Judicial Commission’s Report on Mass Graves in Balochistan