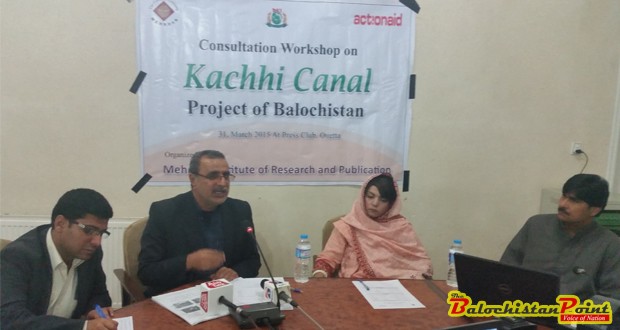 Mr. Buledi made these comments at a workshop held in Quetta Press Club about Kacchi Canal project. Workshop was conducted by Mehrdar institute with the support of Action Aid.

“Provincial government is trying it’s best to ensure that Kacchi Canal project benefits can be shifted to the deserving people,” added Mr. Buledi.

Reiterating the commitment of Balochistan government to Kacchi Canal, Mr. Buledi said that all efforts are being made to persuade Federal Government to release maximum amount of funds for this project.

Moula Baksh Jamali of Mehrdar Institute earlier delivered a detailed presentation on Kacchi Canal project. He stated that total length of Kacchi canal is almost 500 kilometer; from which 300 KM are located in Punjab and remaining part of canal passes through Dera Bugti, Naseerabad, Kacchi and Jhal Magsi districts of Balochistan. Mr. Jamali further elaborated that Kacchi canal will irrigate 713,000 acres of agriculture land in Balochistan and more than one million people will benefit from this canal.

Others who spoke at the workshop include Ashraf Baloch Deputy-Director Agriculture department, Skinader Jilani, Peer Muhammad Siyal, Hafeezullah Khoso and others.

Mehrdar institute announced, in the workshop, to continue research work on Kacchi canal project in future.

Published in The Balochistan Point on March 31, 2015