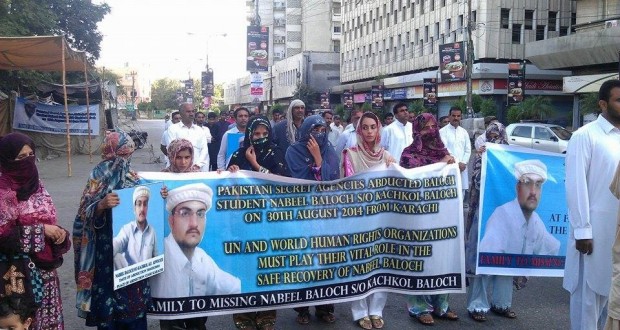 KARACHI: Relatives of Missing Nabeel Demand For His Safe Recovery

A large number of children, women and civil society members protested on the first day of Eid, demanding safe release of Nabeel Baloch including   all disappeared persons from different parts of Balochistan.

Nabeel is son of Kachkol Ali advocate, the former opposition leader of Balochistan assembly.   He was arrested from Jat Pat market of Layari, Karachi.

“My brother was arrested by intelligence forces and still we have no idea about his whereabouts. Either he is alive or dead “said Maah Para, sister of Nabeel Baloch

Maah Para said that on 23 September, Sindh High court ordered to present Nabeel in the court, however, DG Ranger, Sindh government, IG south Karachi did not take any action.

The family members showered their serious concerns   regarding security of Nabeel.

The demonstrators   requested to all security, law enforcement agencies, Federal and Provincial government, human rights activists to play a vital role to recover missing Nabeel and present   to court.

Published in The Balochistan Point on October 6, 2014

2014-10-06
admin
Previous: Deputy Secretary of CM Secretariat Kidnapped
Next: Point Of No Return