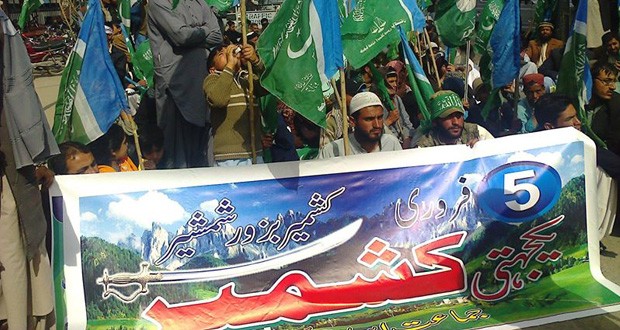 Quetta – Kashmir solidarity day was observed in Quetta just like the rest of Pakistan.

5th February is observed as a Kashmir solidarity day and a public holiday in Pakistan every year.

Quetta Press club was the center of attention for all the protests relating to Kashmir solidarity day. Different political parties and civil groups held demonstration against Indian government for occupation of Kashmir.

A major rally of Jamaat-e-Islami reached Quetta Press club led by their provincial chief Abdul Mateen Akhundzada. Participants of the rally chanted slogans against India and for the independence of Indian Held Kashmir.

Another major rally was organized by Jamaat-ud-Dawa that also held a demonstration against India outside Quetta Press club.

“It’s meaningless to observe a public holiday on 5th February on pretext of Kashmir,” said a citizen while talking to The Balochistan Point.

Another citizen told The Balochistan point that most of the people observing Kashmir solidarity day don’t even know why 5th February is chosen for this purpose.

Published in The Balochistan Point on February 5, 2015