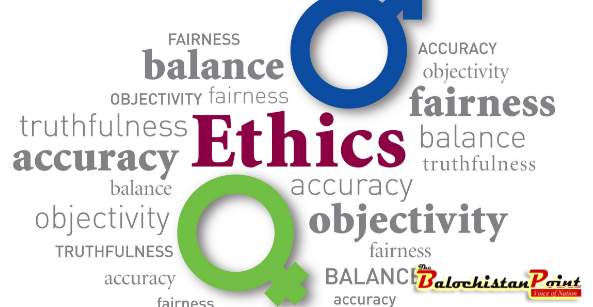 Islamabad: The Code of Ethics strive to play a fundamental role for democratization of a society, nonetheless, face many implementation challenges in Pakistan. This was announced at the national symposium on media ethics organized by Mishal Pakistan.

Industry experts, senior journalists, media professionals and academicians attended the symposium along with a large number of students, scholars and faculty members from the journalism and media sciences departments of the leading universities in Pakistan.

Presenting the research paper on the ‘Impact of commercialization on media”, Amir Jahangir, Lead Researcher and CEO of Mishal Pakistan, said, “Commercialization in Pakistani media emerged after the de-regulation in 2002 and the open-air ways policy and boom in the TV industry.

Talking at the symposium, Dr. Zafar Iqbal, Chairman Department of Mass Communication, International Islamic University, Islamabad said, almost 10,000 fulltime and free lancers are working in the media industry in Pakistan”. He further said that, there are around 300 elite journalists especially in the TV industry who get extra ordinary monthly salary, whereas, the rest of the journalists are underpaid and are constantly insecure financially. In this situation fair and free journalism is a serious challenge”. “Balance, honesty, fairness, objectivity, liberty, truthfulness, accuracy, etc. constitutes the conceptual framework around which journalistic activities revolve”, he added

Presenting the findings of the regional consultations and presenting the new Code of Ethics, Senior Media Development Experts, Shabana Arif and Ali Salman shared the new proposed code of ethics for media in Pakistan. Aidan White, the founding Executive Director of the Global Ethical Journalism Network through a video link congratulated the Pakistani media community for taking a lead in making Pakistan one of the pioneers for creating new benchmarks for media ethics. Pakistan is leading not only in the region but also globally as well.

This Mishal activity was part of the DANIDA-supported ‘Strengthening Media in Pakistan’ project being implemented by International Media Support (IMS), which seeks to promote greater media professionalism in the country and an enabling environment in which to foster it through partnerships with key media stakeholders including media organizations, regulators, coalitions, parliament, policymakers and the government.

Established in 2003, Mishal has been engaged with some of the most dynamic organizations, including media enterprises and global development agencies helping them develop their communication strategies and solutions for better understanding and creating synergies with their concerned stakeholders. Mishal is the country partner institute of the Center for Global Competitiveness and Benchmarking Network of the World Economic Forum. Mishal’s research and capacity building initiatives have assisted and helped successive governments to improve Pakistan’s global ranking on competitiveness, gender gap, trade and information technology indices.

2017-02-25
admin
Previous: BISP survey teams to reach each, every house hold in Balochistan: Marvi
Next: Legislators agree to work for developing national agenda on women’s rights