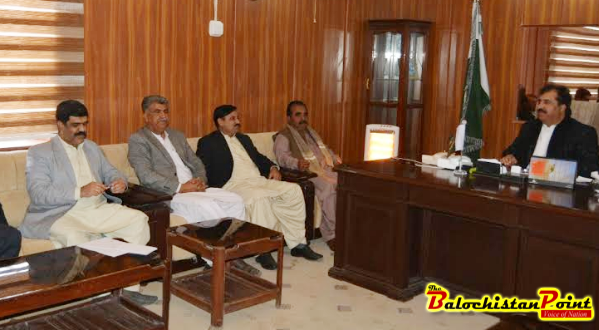 KHARAN: Deputy Commissioner Kharan Mr. Tariq ur Rehman has said that Tuberculosis T.B Control Program Balochistan is rendering services in an excellent manner to the far flange areas of province. He said that just a few years ago it was believed that TB was an old disease, and it was no longer a problem for humans but worldwide more people die of the disease than any other infectious disease. We have to work more progressively to curb this epidemic.  He was expressing these views while chairing a briefing session after a Team of Provincial TB control program visited district Kharan for Intra District meeting Q-4, 2017.

In the meeting Provincial Manager T.B program Dr. Sultan Ahmed Lehri briefed that Tuberculosis is caused by bacteria called Mycobacterium tuberculosis. In Balochistan about 27000 new TB cases developed every year, in this matter of grave concern Balochistan TB Control Programme is utilizing all its available resources to give maximum innovative sophisticated health facilities to the masses.

“There are 3 TB facilities in Kharan district one is in DHQ hospital other at BHU Hurro and one at BHU Sarwan. Adding more, he said that total number of new TB patients annually are about 330 in which in the preceding year of 2017 only 85 were notified to Provincial Data base in the District. Deputy commissioner appreciated the efforts of team TB Program in installing of new latest TB diagnostic-Xpert machine at DHQ hospital. He also promised for integrating the screening approach for TB by Polio team , also assured in adding it in priority agenda of District meeting in the forthcoming meetings.” He added.

On the occasion Mr. Lehri  asked  the District team T.B Control to be vigilant and proactive  and urged all relevant stakeholders to work in close liaison with the Hospital management and District Administration in case notification of TB. He also appreciated the efforts of the team motivated the district team, all stakeholders for working together in enhancement of TB Program pragmatically.

Published in The Balochistan Point on January 5, 2017