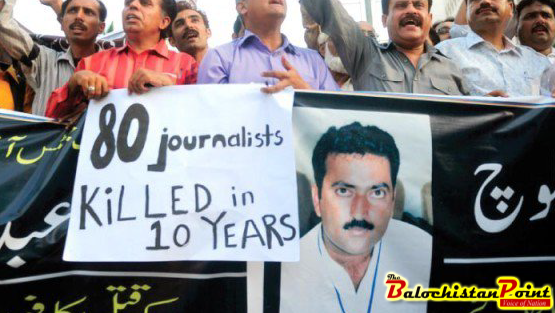 The killers of Abdul Haq Baloch, correspondent of ARY News television channel remain free even after four years of his murder in Khuzdar, Balochistan .

Abdul Haq Baloch, who was also general secretary of Khuzdar Press Club was murdered by unidentified men on 29th September, 2012 in Khuzdar. He was shot multiple times while on his way to home and died at the spot. Haq, 34 had been threatened along with five other journalists in Khuzdar in November 2011 by a banned militant organization for not giving them coverage. However, no group claimed responsibility for his murder.

On October 2, 2012 former Interior Minister Rehman Malik announced Rs 2.5 million reward to those who would provide the information about the murderers of Haq.

In April 2015, Home Department in Quetta the government of Balochistan, under sub-section (1) of Section (3) of the Balochistan Tribunal Inquiry Ordinance, 1969, appointed District and Sessions Judge Khuzdar as tribunal inquiry on the murder slain journalists.

However, even after the passage of over a year since the announcement of formation of tribunal the killers of murdered journalist could not be identified. Abdul Razzaq, brother of Haq, said the family has not been informed of the findings of the inquiry tribunal.

Muhammad Siddique Mengal, president of Khuzdar Press Club, said they had been facing threats from opposing sides in the militancy. Shehzada Zulfiqar, President, Quetta Press Club demanded the government to bring killers to justice and compensate the families of all slain journalists in Baluchistan.

Published in The Balochistan Point on September 30, 2016