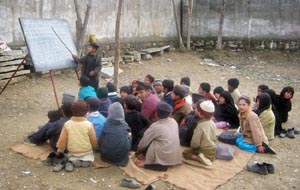 Letter: Education At Verge Of Collapse In Balochistan

Education is a great weapon for every individual to shields himself against the dangers that a he can face during his life time in this mortal world. Unfortunately, people of Balochistan are not allowed to acquire education due to indifferent attitude of their government.

When the corrupt government of Nawab Raisani ended and Dr. Malik came into power, people developed great expectations. They thought that new government will help in facilitating the imparting of education in the most backward regions of the province. Alas! Dr. Malik led coalition also remains failed to deliver.

Devastating floods of 2010 wrecked all the schools in Jaffararbad district. Due to incompetence of current government most of the schools still lay in ruins. Jaffararbad District is well populated but there is no proper educational system for students. As a result students move to Sindh to acquire education which is a big failure for Dr. Malik and his cabinet.

I request Dr. Malik and all his collation partners to take practical steps to improve educational infrastructure in far flung areas of Balochistan rather than boasting about education emergency which exists on paper only.