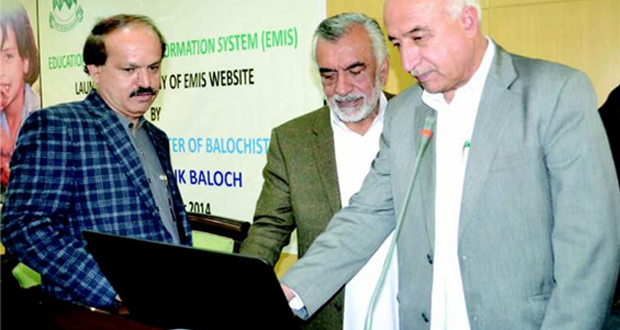 QUETTA: Education website launched by Balochistan government on Monday is still incomplete, learnt the Balochistan Point while reviewing the website.

Chief Minister (CM) of Balochistan, Dr. Malik Baloch, launched Education Management and Information System (EMIS) website at a ceremony held in Quetta. EMIS website has been prepared by education department of Balochistan in collaboration with UNICEF.

EMIS is designed to contain data about all educational institutes in Balochistan. The main benefit of EMIS website is that it will help in identifying ghost schools and absent teachers.

Review of this website by The Balochistan Point reveled that it’s still incomplete and there are flaws in it.

Almost all the pages of the website are still under construction other than homepage.

The proper domain name of this site www.emis.gob.pk is not working and instead a number based domain http://103.31.80.170/emis is being used.

This reveals that EMIS website has been launched in haste by the Government of Balochistan to take credit. It’s an established practice to launch an official website when it’s complete and fully functional.

“Balochistan government has deceived the public by officially launching the EMIS website when it’s still under construction,” complained a citizen who was disappointed after browsing EMIS website.

“EMIS is a good step taken by the government but its pre-mature launch has once again put question marks on the governance of the Balochistan government,” said an analyst.

Published in The Balochistan Point on December 30, 2014

2014-12-30
Editor
Previous: Nationalist Government Of Balochistan Is Corrupt And Incompetent : Senators Of Balochistan
Next: Letter: Education At Verge Of Collapse In Balochistan