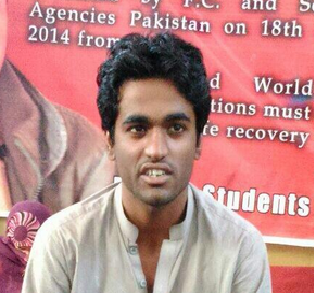 Issue of missing persons is the most complicated matter of  Balochistan and unfortunately no efforts have been made by the government to resolve it.

The chairman of Baloch student organization Azad (BSO-Z) Zahid Baloch, was abducted on 18 March, 2014 from Quetta allegedly by the secret agencies of state. On April 22, 2014 Baloch student organization announced a hunger strike till death against the abduction of Zahid Baloch andthe hunger strike is being led by a member of (BSO-Z) Latif Johar. From last few weeks Latif Johar is in hunger strike for the safe release of his chairman yet he has not received any help from the United Nations and government of Pakistan.

I request the United Nations and the government of Pakistan to take immediate steps to help Latif Jouhar for the release of his chairman Zahid Baloch.

2014-05-29
admin
Previous: The Chief Minister Balochistan appeals Lateef Johar to break his Hunger Strike Till Death
Next: A glaring attempt to formulate Balochistan into Wasirstan