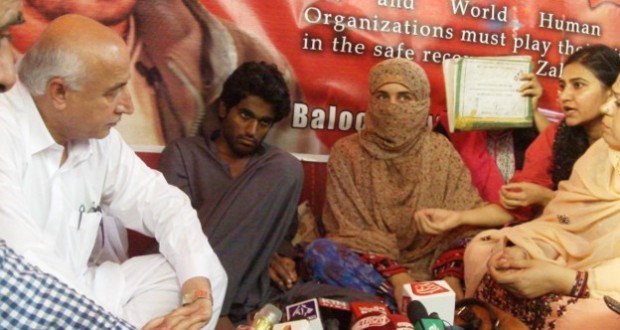 Quetta:Dr. Abdul Malik Baloch visited the camp of BSO-Azad’s outside Karachi Press Club on Wednesday and appealed Lateef Johar to break his ‪Hunger Strike Till Death.

Lateef Johar is   one of the Central Committee Members of Baloch Students Organization-Azad, on April 22, he announced “Hunger Strike Till Death” at Karachi Press Club to protest the enforced abduction of Zahid Baloch.

Zahid Baloch was allegedly picked up by security forces on March 18 in Quetta, the capital of Baluchistan; Balochistan is racked by a separatist insurgency.

In his visit Dr. Abdul Malik Baloch appealed Lateef Johar to give up his more than a month long hunger strike. However, Lateef Johar denied breaking his hunger strike till the safe recovery of Chairman Zahid Baloch.

Dr. Abdul Malik Baloch said, “Zahid Baloch is a political activist and he is struggling for Baloch rights and the FIR of his disappearance will be registered.”

“Being Chief Minister of Balochistan I am responsible if anyone is disappeared in Balochistan.” Dr. Baloch said,

Dr. Baloch said, “The issue of Baloch missing persons is the most complicated issue of the province”

“The Federal Government has authorized me to hold talks with all the alienated Baloch leaders and I am striving to bring them all, on the negotiations table.” Said Dr. Abdul Malik Baloch

Lateef Johar and Vice-Chairperson of BSO-Azad, Karima Baloch alleged that Zahid Baloch was under the custody of the state agencies and vowed to continue hunger-strike until his recovery. However, Malik Baloch  declined to make a promise regarding recovery of Zahid Baloch.

The Baloch students, Human Rights Commission of Pakistan (HRCP) and Baloch nationalists express serious concern about the security of Zahid Baloch and fear of his extra judicially murder. Now more than a month has passed and Lateef’s condition is deteriorating with every passing moment. Prior to this hundreds of Baloch missing persons have been turned into dead bodies and hundreds more are still missing

Published in The Balochistan Point on May 28, 2014