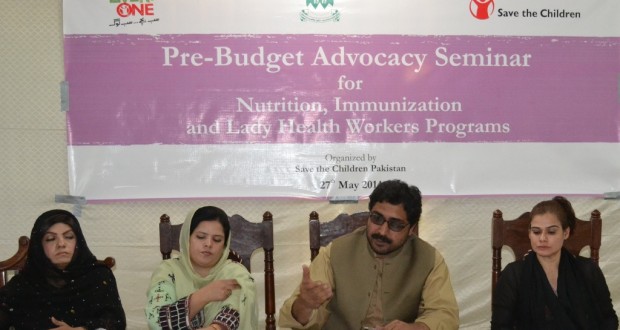 QUETTA: Balochistan government will have to need Rs 17 billion funding to continue its Expanded Program of Immunization (EPI) after withdrawal of GAVI support in June 2015. This was said in Pre-Budget seminar on EPI, Nutrition and Lady Health Workers organized by Save the Children, here on Tuesday.

Giving his presentation, EPI Balochistan’s Deputy Coordinator, Dr. Ishaq Panezai said that the Global Alliance for Vaccination of Immunization (GAVI) would withdraw its funding for EPI in Pakistan after 15th June 2015. “After passage of 18th Amendment into the Constitution, the Health programs have been devolved to provinces from the federal government and now it is responsibility of the provincial government to continue EPI program with its funds after June 15, 2015,” he said.

He further said that experts of international donor agencies have said that Balochistan would have to need Rs 17 billion funding to continue its EPI program. He said that World Bank, Save the Children and other organizations have expressed their interest to financially support EPI program in Balochistan.

He lamented that 15 children had died of measles in Balochistan in prevailing year due to non-provision of immediate health care. He urged the Finance Department of Government of Balochistan to release allocated funds for EPI program to control the menace of measles.

Nawab Mohammad Khan Shahwani, Minister for S&GAD said that provincial government under the leadership of Dr. Abdul Malik Baloch is committed to improve the life standard and health conditions of women and children of the province. “Health is our priority. Definitely, we will allocate adequate budget and human resources for Immunization, Nutrition and LHWs programmes” he said.

Ms. Yasmin Lehri, MPA of National Party spoke about the plight of women and children in Balochistan and assured that she would raise the budgetary issues for health in standing committee so that sufficient funds be allotted and properly utilized.

Dr. Shama Ishaq, MPA of ruling National Party highlighted the vision of his party and leadership for the cause of children and women in Balochistan. She said that as parliamentarian she would raise these concerns in the standing committee on finance department and called for interaction between civil society and government.

Ms. Samina Khan, MPA of PML-N said that the facts shared by the Nutrition, Immunization and LHWs programme are shocking and portray the worse condition of women and children’s health in the province. She emphasized that the government should allocate adequate resources for all three programmes. Ms Khan assured her support and cooperation for the better health of women and children of the province.

Nadeem Shahid, Provincial Manager Advocacy and Campaign at Save the Children Pakistan Program said Government of Balochistan has regularized LHWs however; it should also make budgetary allocation for increasing the number of Lady Health Workers (LHWs) in the province so that 100% population is covered.

“Budgetary allocation by the provincial government is also important to make sure that the bag of the LHW is filled with medicines and other commodities as currently; federal government is paying only for the salaries of the LHWs till next NFC award in 2015,” he said.

Nasir Bugti, Deputy Director Nutrition Program Balochistan said that condition of women and child health is miserable in the province. “According to The Pakistan Demographic Health Survey PDHS 0 2012-13, the Expended Programme on Immunization (EPI) coverage is merely 16% reason of this low coverage is that in 227 union councils there is not any vaccinator,” he said.

Dr. Noor Muhammad Qazi, Provincial Coordinator, Lady Health Workers Program, said that Lady Health Workers programme is not receiving budget for activities in the province. “The Budgetary allocation by the provincial government is also important to make sure that the bag of the LHW is filled with medicines and other commodities as currently; federal government is paying only for the salaries of the LHWs till next NFC award in 2015” he said.

Dr Mohammad Dawood Khan, Manager Health at Save the Children Balochistan welcomed the participant. He thanked the parliamentarians, civil society and media for attending the seminar and highlighting the plights faced by the health programmes in Balochistan due to financial constraints.

Published in The Balochistan Point on May 28, 2014