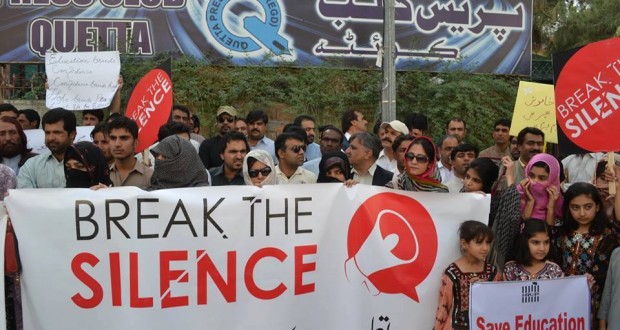 Quetta: Protest against forceful closure of girls’ schools in Panjgur

A large number of  social activists, members of Non-Government Organizations (NGOs) , students, human rights  activists, lawyers, media representatives, political parties and writers participated in the event  and demanded for the protection and promotion of girls education in Balochistan, mainly, in Panjgur district.

The protest was held against the forceful closure of girls’ schools in Panjgure. Recently an underground militant group named Tanzeem-ul-Islami-ul-Furqan has threatened and issued warnings to abandon girl’s education institutions in Panjgur.  This group issued pamphlets warning all private schools in the district to shut down girls education or to face the consequences.

According to the Civil Society members such protest would be continued in other districts of Balochistan for security of  girls schools  to pressurize responsible authorities to take measures.

Published in The Balochistan Point on May 26, 2014