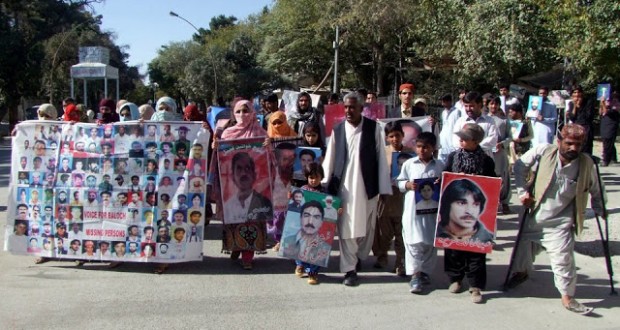 Violence, enforced disappearances, kill and dump policies of Baloch activists and attacks on Shia Hazara minorities including Zegri in the Balochistan territories cause sadness and anger for Muslim celebrations ending the Hajj.

As Muslims worldwide celebrated Eid al-Adha, the people of Balochistan tear up over who are left after a decade long merciless fighting between insurgents, religious extremists and security forces.

For Zegri minorities of District Kech of southwestern Balochistan province, the end of a ten days fasting was supposed to be a time to celebrate Eid-al-Adha with zeal and enthusiasm. Instead, many are spending the Eid feast at the graves of their beloved ones while some at refugee camps in Turbat who were compelled to migrate from their native areas like Saami, Shappok, Shahrak and Hoshab after the Frontier Corps led a major operation there.

For 60 year-old Dur Bibi, Eid is not less than a yoke on her shoulders as her son Gos Bux was killed just a few days before Eid. She spends her Eid sitting on her son’s grave. People of her area and fellow mourners looked on unhappily as Dur Bibi arrives in the graveyard and starts kissing a six feet grave under which her dead son lay who was buried just a few days ago.

The man was killed in Turba after having gone missing for 36 hours. Turbat is one of the areas worst-hit by a bloody military operation that has cost hundreds of Baloch lives.

“These ten days for us are supposed to be holiness and worship, not days of battles,” Dur Bibi said with tears in her eyes, referring to the 10 days of fasting before Eid-al-Adha.

“What will I feel? This is like burying your young son with your hands on the day of happiness. I have lost everything but not courage; I believe my son’s sacrifice will not go in vain.” When asked what has her son sacrificed, thinking for a while she said “for a greater cause” without elaborating.

Among his two brothers, Gos Bux was picked up by unknown armed men earlier this week. One of his brothers was released and the other one is still missing, while the bullet-riddled body showing signs of extreme torture of Gos Bux surfaced in the mountainous region of Turbat after 36 hours of his disappearances. Gos Bux had a large family. Two of his daughters looked drained from grief and from a war for which there seems no end in sight.

The current wave of violence against Zegri minorities has claimed more than 20 lives — mainly civilians  — according to the local of the area. Locals said over two dozen Zegri minorities from District Awaran and Kech have been abducted within two months.

For the people of Zegri populated areas like Gomazi, Tump, Shahrak, Saami, Shappok and Mand this is the Eid of blood!”

Stricken by the hard-hitting financial crisis, the migrant of these areas currently settled in Turbat city complain about financial crises which sometimes make them to spend days and nights without food.

Besides the deteriorating economy, the social life of these refugees is beleaguered by grief.

But in the provincial capital Quetta, where Shia Hazara have become a soft target of religious extremists, the authorities and cabinet members of Dr. Malik Baloch’s led government were kept busy denying local reports about current wave of violence against Zegri minorities in the home town of Chief Minister Dr. Baloch who is currently celebrating his Eid in Paris with a 20 members delegation.  (Courtesy: http://www.sharnoffsglobalviews.com/)

Kiyya Qadir Baloch is a freelance Baloch journalist associated with the Daily Times based in Islamabad. He reports on foreign affairs, Baloch insurgency, militancy and sectarian violence in Balochistan.

Republished in The Balochistan Point on October 6, 204