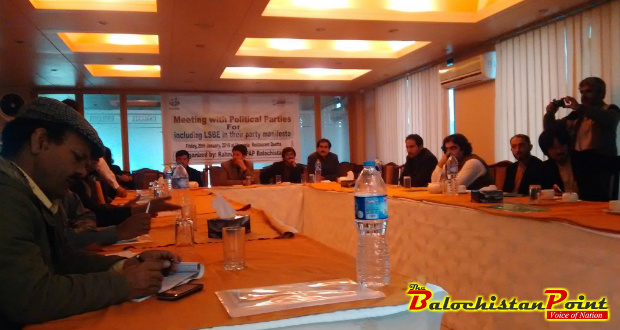 Lobby meeting held for inclusion of LSBE in party manifesto

Quetta – The Rahnuma Family Planning Association of Pakistan held a meeting with key workers and office bearers of Pashtunkhwa Milli Awami Party (PkMAP) as part of their lobbying with progressive political parties for inclusion of Life Skill Based Education (LSBE) as part of their party manifesto for young people and to garner their support for inclusion the same in the national or provincial mainstream curriculum.

Welcoming participants to the meeting, the Rahnuma Provincial Coordinator, Mr. Dawood Khan Batozai explained the key components of the project, concept of LSBE and some of the misconceptions regarding the subject. He pledged support from all the workers of the PkMAP to support inclusion of LSBE in their party manifesto and also raise their voice to help include it in the curriculum.

In their remarks, Malak Omer and Naseer Nangyal termed the topic ‘crucially important’ and ‘need of the hour’. They expressed support and commitment for working to include LSBE as part of the party manifesto and work on all levels to advocate for its inclusion in the provincial educational curriculum. They also highlighted that the other two component of the project namely child marriages and HIV issues of young people are equally important and they also expressed their support on the topics. Mr. Nangyal said that there have always been evil elements in the society who perpetrate heinous crimes like that of Qasoor incident where children were subjected to inhuman and immoral circumstances. “We must have zero tolerance for such exploitation of children and the state must enact laws for the protection of children” he added.

Mr. Musa Kakar from PMAP Loralai also expressed his commitment and support for the subject and said that we must support LSBE and surrounding legislation beyond all party differences.