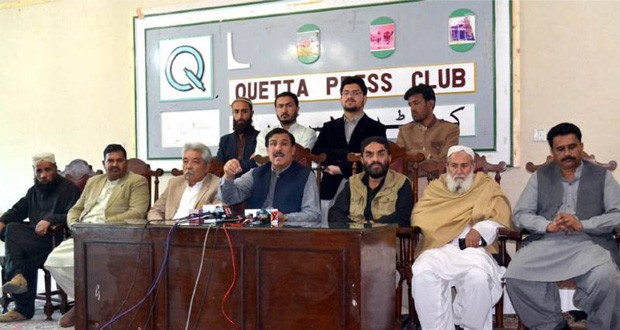 Leaders of APDA held a press conference in Quetta Press club on Monday in response to the statement of CM Balochistan that APDA doesn’t have majority for Quetta Local government.

APDA leaders said that they have the support of 46 councilors out of 87 in Quetta Metropolitan Corporation. APDA will reveal the names of its candidates for Mayor, Deputy Mayor and Chairman and Deputy Chairman of District council when election commission announces the final phase of elections.

“We have proof that CM Balochistan is going door to door to our councilors and offering them development funds and jobs as bribe for changing their loyalty,” alleged APDA leaders.

APDA rejected the claim of PKMAP that it has support of 46 councilors and termed it baseless.

“Dr. Malik is CM of entire province not of two parties and he should resist the temptation of buying the loyalties of our councilors,” APDA leaders demanded.

Published in The Balochistan Point on January 13, 2015

2015-01-13
Editor
Previous: Dismal State Of Education In Balochistan: 1.8 Million Children Out Of Schools
Next: Unemployed Graduates In Balochistan Are Waiting For Internships For Two Years