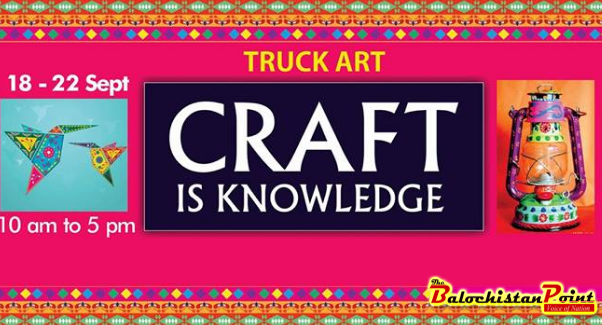 ISLAMABAD: In a programme aimed at promoting traditional skills of the country’s rich, diverse and pluralistic culture, the National Institute of Folk and Traditional Heritage (Lok Virsa) has launched the new program series on “Craft is Knowledge” with the first programme being Truck Art: Engagement with Artisans here at Museum Hall of Lok Virsa.

The programme aims to promote folk crafts, to revive some of the traditional skills and raise awareness about the craft heritage of Pakistan among the younger generation.

The opening ceremony included a number of live, colourful musical performances and variety shows by students from various government schools.

Chief Guest of the ceremony Sardar Ahmad Nawaz Sukhera, Federal Secretary, Ministry of Information, Broadcasting and National Heritage while praising the students consideration said, Thank you for filling my day with so much fun and I am delighted to see so much harmony here. Respecting one another’s culture is very important for creating tolerance and diversity. You showed the power of diversity through your performances. Culture brings people together and ultimately makes a country stronger and peaceful.

Federal Secretary also visited the many stalls installed at the event and met with artisans and students who were learning truck art from the artisans.

Talking to the media, Lok Virsa Executive Director Dr. Fouzia Saeed said that they have launched this initiative mainly for young children. “Our Heritage Museum highlights one craft every month with artisans and experts available for children to engage and learn from them. These craft-persons not only display their crafts and make them in front of the people but also teach and have materials for them to experiment with the medium. This, we hope, will give them hands on opportunity to become familiar with the folk crafts,” she said.

“We want the maximum number of children to learn about traditional arts, which is important for safeguarding folk cultures and their history,” she added.

Forty students and children (age: 6-14 years) studying in various schools and colleges working under the administrative control of Federal Directorate of Education (FDE) are participating in the truck art work training started today.

The training programme will continue till September 22, 2017 daily from 10 a.m. to 5 p.m. Admission is free. Apart from students from different schools/colleges, visiting children are also encouraged to learn craft making techniques from the artisans without any charges.