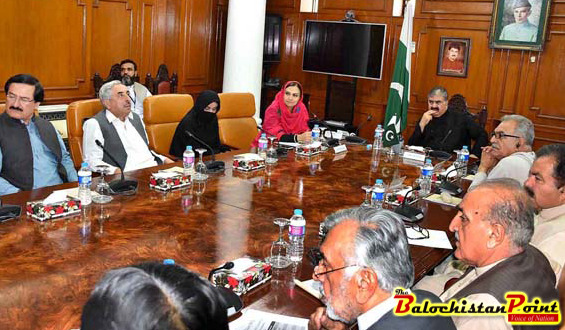 She held the meeting on the directions of Prime Minister Shahid Khaqan Abbasi, who had announced BISP’s expansion on August 19, while addressing political leadership in Quetta.

While briefing the Chief Minister Zehri, Marvi Memon said that BISP had made commendable progress both in terms of expansion and improved service delivery during the past four years of PML (N) government.
It was high time to expand its operations in Balochistan so that each deserving woman in Balochistan could be catered at the doorstep.

Currently BISP is operational in Quetta, Kalat, Makran, Naseerabad, Sibbi and Zhob divisions, where 38 effective offices were providing services to 195,145 beneficiaries.  Marvi said that BISP was planning to expand its network to 25 more tehsils in 16 districts, reaching some 132,547 beneficiaries.

BISP has submitted a proposal for expansion of its offices and recruitment of employees against vacant seats in Balochistan to the chief minister for review and feedback.  The chief minister acknowledged the services of Chairperson BISP and assured her of full support from the provincial government.

He appreciated that BISP’s financial assistance was poverty based instead of being population based.
The meeting also discussed alleged discrepancies in 2010 survey as per international standards and urged to resurvey its data on for various federal and provincial welfare schemes like PMIFL, PMNHIS.

The expansion of BISP Waseela-e-Taleem (WeT) to four more districts in consultation with Balochistan Education Department also came under discussion.

Chairperson BISP apprised the chief minister that the payment mechanism of BISP stipends to beneficiaries was being converted to Biometric Verification System (BVS).

Around 43 districts had been converted to BVS till to date out of which eight were in Balochistan.  They include Kharan, Khuzdar, Qilla Abdullah, Qilla Saifullah, Musakhel, Sibbi, Zhob and Nushki.  The payment mechanism would be converted to BVS in all districts of Balochistan before the general election, she informed.

2017-09-19
admin
Previous: Lok Virsa Launched “Craft is Knowledge”
Next: People working for the welfare of humanity are always remembered in the history: CM Balochistan