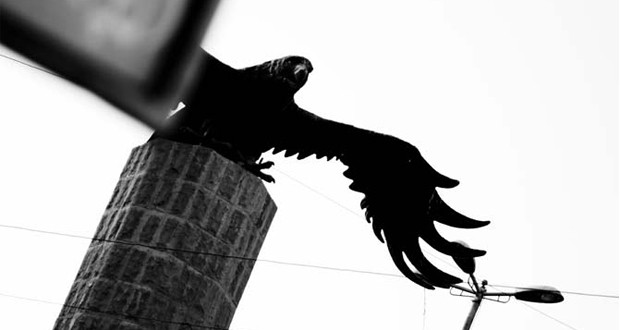 Lyari: Who Will Be The Godfather? – Part 1

I was feeling very down. It was not the first time during the six months, while writing the editorial, that I was feeling this way. I had already faced the same situation before. Who will waste one’s time by reading this editorial, in this very fast and flashy world? We are living in such an informative era where knowledgeable means of exporting and importing of insightful news determine the decisions of people. Indeed editorials have become the memorial of the lost times of the newspaper. Crime and sensational news are running powerfully in the city, maybe which is the reason why everyone wants to cope with crime reporters.

I was displeased roaming around the gallery of the 9th floor. Smoking a cigarette I opened my right hand side window, where the vehicles were empty due to the holiday on the Macleod road. The daily traffic policeman on duty was also not on the road in his mobile cabin. From the left side window there is a road drawn from the City Railway Station of new colony passing Old Market (Juna Market) which joins with Lyari and ends up with the Mehwasha Qabristan (Mehwasha Graveyard) as a closed street.

This was the day I started thinking. How has the Lyari become the source of crime? When it starts getting dark, then it’s better not to go back to Lyari. It is a sad reality. There are very few lights on, in shops and hotels. It might not make you feel comfortable.

In the days of prosperity, the British Army did not forget to do two things under the leadership of Sir Charles Napier when they conquered Sindh. First they named the City Station Road passing through Lyari after Sir Charles Napier. Second they established the Napier Police Station on the bank of the road.

There were roads on both left and right sides of Denso hall. The left side road went to New Chawli where Al-Waheed newspaper office was located, touched the Macleod road. The right side road was divided into two further roads. One went to Meriat road, where there are trading shops and tents, and the other one went to Napier road that had the Memon traders’ offices.

Sir Haji Abdullah Haroon’s office and later provincial Muslim League office were on the same road and there was a brothel a few steps ahead. There were homes of the cooking staff and singers in the brothel area, but apart from them there were also homes of higher society people who had no concerns with the brothel area. (Pir Ali Rashidi “Those Days, Those People”, Urdu translated by Ajmal Kamal, The story of Karachi, first edition pg.no. 107)

Famous Balochi comic writer Baig Muhammad Baigal drew a very interesting map of Napier Road in his book “Joker”. There a man lived in this area whose name was Hussain Gwadar Mail. In the fourth and fifth decades of twentieth century his horse carts were very famous because of the cleanliness. And he always had an Arabic horse to his carts, which used to run tirelessly. Like Kalanag, Dadal and Sherok, Hussain Gwadar Mail was also a vagabond of Naproute (Napier Road); that’s why he was very well aware of the premises of the area. Hussain Gwadar Mail categorized Napier road likewise. The area from Kumar cinema to Nigar cinema stood in ‘A’ class, because of the popularity of the dancers of the area. The ‘B’ class areas included the Sofi hotel and Super Cinema, which was in the southern area of Napier road. The people living there were from middle status and had a white skin. Moreover in the corner of the area there was a street named Imam Bada Street where the third sex creature of God lived. The ‘C’ class area was spread over the starting area of Naproute and the Sofi hotel to the Islam hotel. Its name was Thokar Street (Thokar Gali). Meanwhile from 11 in the morning to 12 at night different people used to come to Naproute to give tribute to Sir Charles Napier.( Hao Day Baloch, Baig Muhammad Baigal, “Joker” pg.no.323 and324, Balouch Print Academy Quetta.)

“Nabi Bukhsh aka Kalang was an impressive man”, Baig Muhammad Baigal said while talking to Dawn.com. He used to do everything alone, while Sherok and Dadal were different. They were four or five brothers. They used to do joint ventures. They established terror anywhere. Whatever I wrote in (Hao Day Baloch) they were the part of my memories. What is more, Hussain Gwadar Mail was my neighbor in Gul Muhammad Lane.

“Karachi is the fostering place for the helpless”. This dictum was very popular in east Balouchistan (Iran). The cruelty of the generation Kargia and Raza Pahlavi made the lives of east Balochistan Baloch miserable. They kept migrating from generation to generation to different areas. Their last waypoint was Lyari in Karachi, which was not a wide spread city at that time. Lyari, like a widow’s parting head, row at the end of the Napier road and at the bank of Mehwasha graveyard was located in the surroundings of Lyari Naddi (Lyari canal). (To Be Continued)

Published in The Balochistan Point on January 23, 2015