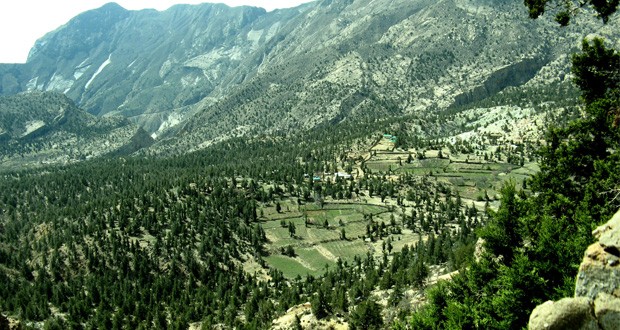 All over Pakistan forest resources are limited covering 4.8 percent of total land area, which is far below optimal standard of 25% forest cover for a country. Most of the natural forest resources are concentrated in the mountainous regions of north covering Himalaya and Karakoram ranges, where more than 60% of the country natural resources are found.

Ziarat consists of 247,000-acre forest of juniper trees, some of which are thousands of years old. These forests may soon disappear because of lack of government conservation efforts and the cutting down of trees by villagers to use as fuel.

The forest in Ziarat is Pakistan’s largest and the second-largest juniper forest in the world. Its slow-growth trees are estimated to be up to 4,000 to 5,000 years old. Ziarat’s dry and cold climate may be favorable to the tree’s growth but it also drives locals to use their branches for firewood.

The juniper forests have suffered from temperature rises and ongoing drought since 1994. Snowfall and rainfall patterns have become irregular. Before the drought, snow fell regularly in winter months. Another reason is disease caused by the use of banned sprays on nearby apple trees. Pakistan is one of the few countries where banned agriculture sprays are used. The juniper trees are drying out and their smaller branches breaking down. The reason for drying of juniper trees is yet not known. It’s sometimes called juniper cancer. Meanwhile, the axing of juniper trees continues in and around Ziarat for fuel and shelter.

Although a gas pipeline provides gas to the main town of Ziarat, most villages do not have access to it. During the winter, pressure in the pipes drops drastically, leaving the locals without gas for weeks at a time.

Activists and some villagers have condemned both the provincial Department of Forestry and Wildlife and outside organizations for slow progress in preserving the juniper forests.

UNESCO has declared Ziarat’s juniper forest a “Biosphere Reserve,” Pakistan’s second, and the United Nations has added the forest to the World Network of Biosphere Reserves.

“We consider the life of a juniper tree as precious as our own human lives. This juniper forest needs special attention, especially in regards to funding and to finding a way to stop them drying up,” said Mohammad Qasim a resident of Ziarat valley. “We don’t have firewood for cooking so we collect dry branches of Juniper. We were advised by our forefathers that cutting of green tree is a sin because the trees are alive like us,” Mr. Qasim further added.

Beside juniper Ziarat also famous for the magic of its honey, its flowers which attain large size here, its lush green grass and cool weather even in the hottest months of summer, “Shinshoab”; lavender like wild bush looks lovely in twilights.

Over 4400 acres in and around Ziarat are covered by apple orchards. The apple grown in the orchards, particularly the black and red Kulu varieties are delicious. A fair amount of black cherry is also grown in Ziarat.

Published in The Balochistan Point on January 23, 2015

2015-01-23
Editor
Previous: Too Little Too Late: Dr. Malik Blames Federal Government For Trespassing On Provincial Domain
Next: Lyari: Who Will Be The Godfather? – Part 1