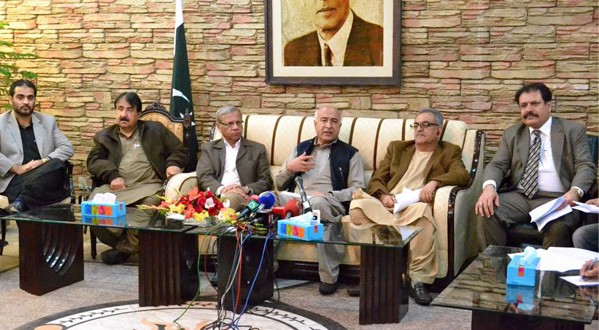 He said this while addressing the concluding session of Balochistan development forum (BDF).

Dr. Malik said that Article 172 (3) of Constitution of Pakistan allows Federal and provincial governments to own Natural resources in equal shares. “Despite accounting for 20% gas production and 30% oil production, Balochistan has virtually no say in affairs of Ministry of Petroleum and Natural resources,” Lamented Mr. Malik.

CM of Balochistan also criticized the agenda setting powers of Federal government in Council of Common Interests (CCI). CCI is a body that comprises of Prime Minister and CMs of all four provinces and it gives approval of important inter-provincial issues.

Dr. Malik and his team failed to bring these allegations to the notice of Prime Minister “Nawaz Sharif” during the inaugural session of BDF.

Nawaz Sharif claimed during inaugural session of BDF that 100% development funds of Balochistan government for fiscal year 2014-15 have been released.

An open letter written to Nawaz Sharif by Provincial Minister for Information, Mr. Rahim Ziaratwal, contests the claim of Premier Sharif. Mr. Ziaratwal in his letter claims that only 50% of the funds have been released by federal government so far.

This only proves that Balochistan government failed to effectively plead the case of Balochistan on the platform of BDF for which millions of rupees were spent.

BDF was described as “A forum where Balochistan’s mouthwatering resources were center of attention, not empty-stomach and barefooted Baloch,” by Former Senator Sanaullah Baloch while Talking to The Balochistan Point.

Published in The Balochistan Point of January 23, 2015

2015-01-23
Editor
Previous: Past Walks With Me‏
Next: Endangered Juniper Forests Of Ziarat Valley