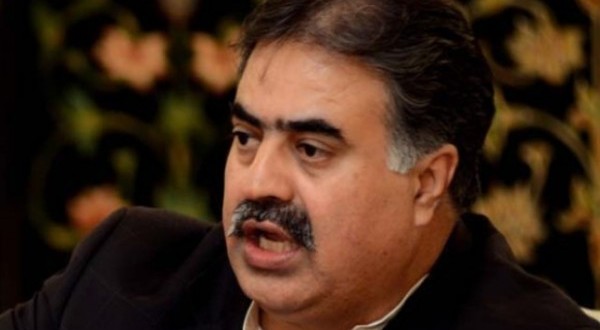 Quetta: Nawab Sanaullah Zehri, the provincial chief of PML-N and Senior minister for communication and works has said that if his reservations are not cleared then his party will sit on treasury benches in Balochistan Assembly.

He further said that the style of governance of Chief Minister Dr. Malik Balochistan is far from satisfactory. Even ministers of his own cabinet and MPAs of ruling coalition are unhappy with him. The activists and leaders of PML-N in Balochistan are being target killed and Dr. Malik has not shown seriousness to apprehend the killers, lamented Sanaullah Zehri.

Moreover, senior minister complained that technically he should be incharge of the province when CM is out of country but that’s not the case. Bureaucracy instead of him rules the province in absence of Chief Minister. The uncivilized treatment of PML-N MPA Mohammad Khan Lehri at the hands of Quetta police was also mentioned by Sanaullah Zehri as an example of treatment meted out to PML-N MPAs by government of Dr. Malik.

Hinting about a threat to leave Balochistan government, Sanaullah Zehri, said that after Eid meetings will be held with Prime Minister and Chief Minister and if reservations of PML-N are not cleared then the party will withdraw its support for the ministry of Dr. Malik.

It must be noted that PML-N is the majority party in Balochistan assembly but still Nawaz Sharif nominated Dr. Malik as Chief Minister and nominee of Pashtunkhaw Milli Awami Party as governor. This has created resentment amongst the provincial chapter of PML-N since day one. If PML-N quit the government then Dr. Malik will not survive as Chief Minister of Balochistan.