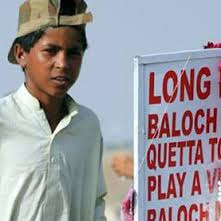 MULTAN: Eleven-year-old Ali Haider Baloch has been walking with other activists of the Voice for the Missing Baloch Persons for over two months from rugged terrain of Balochistan to the plains of Punjab.

He is marching on Islamabad from Quetta to highlight the issue of missing Baloch people, including his father.

He says he hopes that with the conclusion of the march, his father and other missing people will come home safe and sound.

“I’m hopeful of a positive outcome of the longest ever peaceful long march,” he told Dawn.

Had his father not gone missing three years ago, Ali would have been in his classroom at the Government High School, Mushkay.

To attend the march along with his two sisters Gul Saba and Samina, he sought leaves from the school. He said that they were four siblings and of them three were in the long march.

He said though he missed his home, class fellows and teachers, he badly missed his father as home and life without the loving father was like a hell.

His father, Muhammad Ramzan Baloch, had a shop in Gwadar.

Ali said that on July 14, 2010, his father along with him was going to Gwadar from Mushkay in a bus when some plainclothes personnel took away his father from Zero Point, 15 kilometres from Uthal.

Since then, they have not heard of the whereabouts of him from any state agency and police.

He said his father was innocent and demanded that he be produced in a court of law if agencies had some proof against him. (Courtesy : Dawn.com )