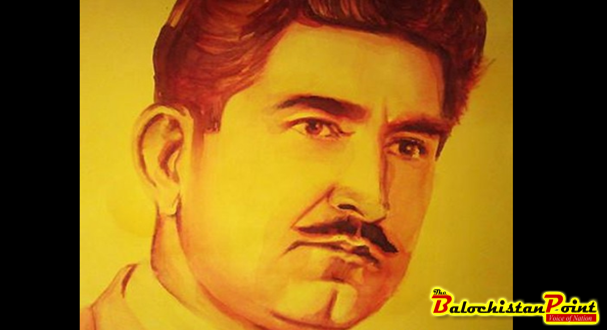 Mir Gul Khan is was a prominent politician, poet, historian, and journalist from Balochistan, Born on 14 May 1914 in Noshki. Gul Khan Nasir was at the forefront of the Baloch Nationalist Movement and was most active between 1935 to 1980.

Gul Khan made his first appearance in the realm of literature in the early 1940s during the heyday of the Progressive Movement. He was among the few progressive Baloch writers who stayed committed with the ideology of the movement till their last breath. Initially, he used Urdu as the medium of his poetic expression, but soon he diverted his attention from Urdu and began inking poems in his first language, Balochi.

‘Gulbang’, the first collection of his Balochi poetry appeared in 1951. It is also marked as the first-ever collection of modern Balochi verse. As he drew inspiration from the Progressive Movement, the poor peasant who is bereft of attire and footwear, time and again, appears in his poetry for which he dreams of a society where injustice, cruelty, in-discrimination and suppression have no room.

In Gul Khan’s poetic dictionary, one can hardly find expressions like ‘rosy cheeks’, ‘intoxicated eyes’ and ‘scented locks’. Instead, it is adorned with expressions like hunger, empty stomach, shirtless people, darkness and oppression, to mention a few. It may seem somewhat strange, yet true, that despite his close association with Baloch tribal leaders, so far, Gul Khan Naseer is the only Balochi poet who vehemently condemns the deeply-rooted tribal society of Balochistan. He has always viewed tribal chiefs and landlords as tormentors of poor farmers and ordinary people, and raised his voice for social justice, equality and, above all, reverence for humanity.

It is true, Gul Khan was also a seasoned politician, historian and translator but today he is better known for his revolutionary poetry. He enjoys the same status in Balochi literature as does Habib Jalib in Urdu. He is the first modern Balochi poet who made his oppressed people aware of their rights to liberty and self-determination.

Today, from Atta Shad to Allah Bux Bozdar, almost upon all modern Balochi poets, the imprints of Mir’s poetry can easily be traced. Even poets somewhat skeptic about Gul Khan’s poetic sensibilities couldn’t avoid his impact. In 2001, the Government of Pakistan, belatedly realising the meritorious services of Mir Gul Khan Naseer, posthumously awarded him the Sitara-i-Imtiaz. Mir Gul Khan Naseer passed away on Dec 6, 1983, after a chronic disease.