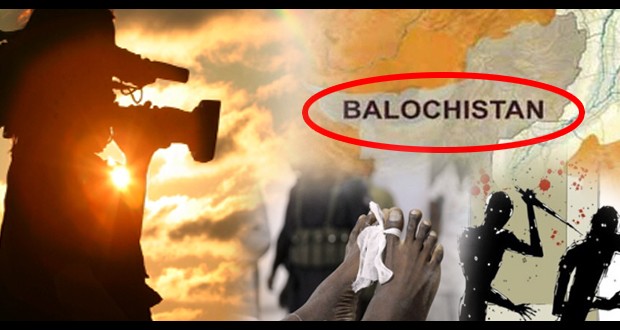 Balochistan is the largest province of Pakistan in terms of area and smallest in  population, replete with natural resources. No doubt, Balochistan has great contribution in development of Pakistan by dint of its mineral resources, mainly, natural gas, copper and gold reserves. However, the people of Balochistan suffer from extreme poverty, diseases, economic exploitation and immense human rights abuse. Unfortunately, these miseries are never covered and we find Balochistan missing in the mainstream media of the state.

Media, being fourth pillar of the state should have covered Balochistan equally; inversely, this remains a dream only. The backwardness of Balochistan should have been the main concern but the unbalanced reporting of media ratifies the violation of ethics of journalism. Very tiny issues of other parts of Pakistan become headlines in print and electronic media but big humanitarian questions hardly make place in the mainstream media.

The political, social and civil society organizations have huge reservations and grievances against media in Balochistan. Time and again boycott of the news channels and newspapers have also been reported. The poor coverage of Balochistan in media is justified that the most volatile land where political activists, journalists, human rights defenders, teachers, intellectuals, doctors and lawyers are abducted and later on killed and dumped but their killers are  not arrested nor the media highlights these issue.

Obviously, Being in Balochista we observe the discovery of new minerals is reported in print and electronic media but the unearthing of mass graves of Baloch disappeared people hardly becomes a news for channels and print media. Unfitness of cricket players and blisters on the hands of tennis players become breaking news but the blistered feet of Farzan Majeed, Sami Baloch, Mama Qadeer Baloch and two dozen women and  children cannot be a common  news in the media who have been marching for the safe release Baloch missing persons.

No supply of natural gas from Balochistan for domestic and commercial purpose to Punjab and other parts of Pakistan becomes breaking news, however, the deprivation of 95 percent of the people in Balochistanis not noticed who have no access to their own natural gas because it is supplied to the Punjab. Hardships of the people in the disruption of the gas supply in Punjab and other parts of Pakistan are covered but the shivering and diseases of people in Balochistan are ignored.

The gold and copper of Chagi, Hubco Power project, Gwadar project are valued in the media and for the state yet the people who are deprived of clean drinking water, education, healthfacilities and basic human rights have no value in the media. The children who die of disease due to no health facilities cannot become news story in the media.

The missing of key to the film star Meera’s car and travel in the Rickshaw becomes leading and breaking news but missing of thousands of Baloch from different walks of life is barely debated.

The abduction of eight years old Chakar Baloch and later recovery of his bullet riddled and tortured dead body cannot gain the attention of news channels.

Recently in a conference on the role of media I.A. Rehman, Secretary General of the Human Rights Commission of Pakistan in his speech concludedthat “We are still demonizing communities yet no activism on the part of citizens is there. Balochistan represents one such population which is not being covered properly because it does not guarantee good ratings to the media.”

“We opted to remain silent in the case of Bengal and nothing is stirring us to open up now. We have learnt nothing from the history.” criticized I.A. Rehman

Aforementioned are some well-established facts about Balochistan and media, which rational people never deny.  The role of media regarding Balochistan is really disheartening. News channel owners and newspapers’ publishers do not seem in the position to cover Balochistan as much as it deserves. If media outlets in Pakistan believe in the ethics of journalism then they have to change their policy and discrimination against resources rich land.

2014-02-18
admin
Previous: More questions in Baloch saga
Next: All differences should be resolved through religious and democratic manners: Chief Minister Balochistan