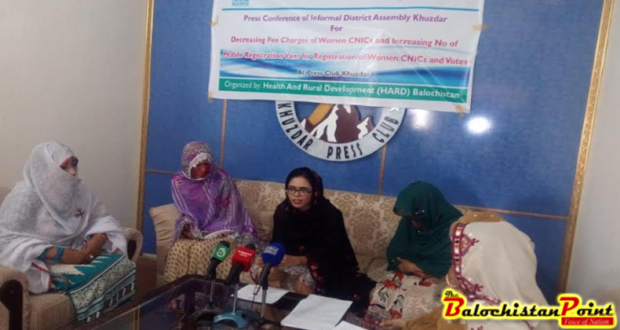 KHUZDAR: The Informal District Assembly members said that 0.8 million women do not have Computer National Identification Card and 2.6 million are deprived from right to vote in Balochistan and million more women will be unable to vote in future if necessary strategy are not adopted and implemented for their CNICs and voting registration.

The Informal District Assembly Members set upped by Health And Rural Development (HARD) Balochistan with the assistance of Commonwealth Foundation, held a press conference on Tuesday and demanded National And Database Registration Authority (NADRA) to establish the registration centres at Tehsil and Union Council level, increase the no of Mobile Registration Vans (MRVs) in district Khuzdar and reduce the fee charges of registering citizen cards (CNICs) at minimum level in order that women and their family members could be able to afford the fee availing CNICs.

They also asked Election Commission of Pakistan (ECP) for expediting the process of registration of women who are not registered in electoral lists and should work with political parties and Civil Society Organization (CSOs) to assist in voting registration in order to ensure women voting in upcoming general and local elections.

The young Women Members of Informal District Assembly demanded NADRA and ECP for rapid response for ensuring the gender parity in citizen card (CNICs) registration and electoral process in order that women avail their right to vote, right to citizenship and enjoy their civic and political rights equally as citizen of Pakistan.

Published in The Balochistan Point on June 7, 2018

2018-06-07
admin
Previous: The dwindling forests in Balochistan
Next: Lok Virsa to hold “Exhibition of Traditional Calligraphy”