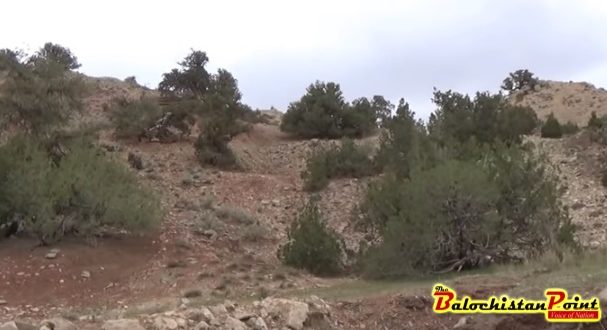 The dwindling forests in Balochistan

It is sad that despite all of the ecological, social, economic and health benefits of forests, deforestation and the degradation of forests are at alarming rate in Balochistan, as it presently covers 1.2% (416628 hectares) of forest area out of its total land, and a negiligible canopy density of 0.2% of the total forest cover of the country. It is all because of the factors inhibiting forests to expand, known to all of them are shifting cultivation and uplanned urbanisation.

Almost 70 per cent people of the province rely on Agriculture, from which most of farmers shift their cultivation to the fertile lands and keep hewing the majestic trees of forests and they even go through the process known as Burn Agriculture, whenever their lands get infertility.

Apart, according to the Indus River System Authority (IRSA), Balochistan has received 8,000 cusecs of water from Sindh during the past one year, but regrettably, this water is mainly used for agriculture purpose, not to establish any forests; given that there is not enough water for the maintenance of forests across the province.

Moreover, lack of awareness, logging operations, overgrazing and other similar factors are further enhancing the plight of forests. It is worth mentioning here that the government is not in condition or willing to implement the coherent policies through Forest Department. Unplanned urbanisation, especially in the outskirts of Quetta, Gwadar and Khuzdar has touched zenith, and there are not any strict policies against it. The impact of CPEC’s network of railways, roads and pipelines cannot be neglected, also. Hence, shrinking forests are ballooning in every passing day, and its effects abrupt like volcanoes.

Turbat, a southern city of Balochistan, received the hottest day in Pakistan’s overall history; its mercurry reached at 53.5°C last year, which demontrates that the province is under the influence of extreme climate change.

It is common that cutting trees destroys water cycle and can lead to barren land, soil erosion, flood and loss of biodiversity. Same is happening in various parts of Balochistan. The animals including turtles in the coastal areas of Gwadar and Lasbela are under major threats due to lack of food availability, as 80 per cent of animals live in forests. Now the question pops up in mind that how to tackle this tragic challenge?

Firstly, having a perspicuous concept about the term “forest” is indispensable. According to the actual definition of forests, linear planting, agriculture, miscellaneous plantations and other scattered trees do not constitute forests. The Food and Agriculture Organisation defines forest as a portion of land bigger than half a hectare with trees higher than 5 meters and a tree canopy cover of over 10%, or with trees that are able to meet such criteria.

Secondly, the remedy of this malady lies in identifying the basic geographical regions of the province: uplands (40%), deserts (37.6%), coasts (12.7%) and plains (9.7%). Hence, the trees should be placed at their suitable habitats. The sun-loving trees of Kharan, Chagai and Panjgur cannot grow well under the cold tempratures of Quetta and Ziarat, while the Mangroves of Gwadar and Lasbela cannot develop properly in the fresh water habitats of Sibi, Nasirabad and Jaffarabad.

Cold temperature delays spring crops in the uplands of Balochistan, like Loralai and Kalat, therefore priority should be given to the establishment of coniferous forests because the climate is quite favourable for them. It is good opportunity to plant Junipers in these areas, same as in Ziarat that covers massively 110.000 hectares.

Furthermore, Balochistan receives average annual rainfall of 150-200mm, which is very less according to its larger area. Therefore, the water sector must consider initiating Water Management Programmes to prevent the huge drought caused by low rate of rainfall especially in Awaran, Kech and Nushki. This can be done through establishing new reservoirs. In case of water shortage in coastal areas, brackish water can be converted into fresh water through desalination plants, which is quite helpful. If possible, provincial agreements can be put forward to resolve this severe issue.

In addition, it is very necessary to have check  and balance  in every corner of the province against so-called offenders, like Timber Mafia and Loggers. Monitoring would do well in playing this crucial role; aerial photographs, suitable imagery and hotspot analysis are the common modes of it. Most likely, hiring forest guards and providing ownership to the masses would be an additional boost.

Spreading awareness at an individual level matters a lot in the mileau that we inhabit; be it children, teenagers, young or old ones. The rate of deforestation skyrockets uncontrollably, if the people do not know the importance of trees. Due to lack of awarenes, most of farmers living in Balochistan lack the ability to use soil-saving methods of farming: crop rotation (the practice of growing different crops within same field), use of high yeild variety seeds (the seeds that yield ten times more than regular seeds while utilising less amount of soil) and Hydroponics (a method of farming without soil).

Initiating projects pertaining to both afforestation and reforestation will be a brilliant step taken by government as well as non-government organisation. Finland, a country, which is almost equal to the size of Balochistan, has massive forest area of 25.381 million hectares; it is 60 times larger than that of Balochistan. Thus, to meet this target of getting 25.381 million hectares of land under forest in the province, we will need approximately 19 billion large trees. If it is not feasible, aiming at having 2 billion large trees will be enough.

To conclude, the allocation of Rs5.87 billion for Penn Programme in the Environmental Humanities (PPEH) in Balochistan’s provincial budget 2018-2019 is commendable. The programme will gain a boost in generating local and global awareness and engagement in the emergent area of the environmental humanities through its various schemes.

The writer is a student, pursuing B.Sc in Ecology, Zoology and English at Government Boys Degree College, Jacobabad.

Published in The Balochistan Point on June 4, 2018