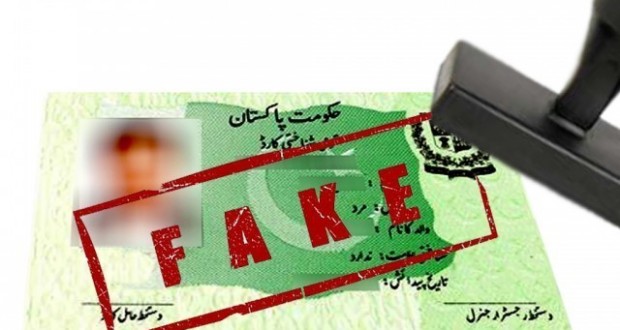 Quetta: In a startling revelation, an officer of National Database and Registration Authority (NADRA) has confessed to have issued hundreds of illegal Computerized National Identity Cards (CNICs) to afghan immigrants after receiving bribery.

NADRA employee made this confession while being interrogated by Nationality Accountability Bureau (NAB). NAB has filed reference against two more NADRA officials who are presently under custody of police.

NADRA employee Awais Pervez made the aforementioned revelations and also submitted a plea bargain which was accepted by NAB.

According to spokesman of NAB, all three accused officials of NADRA were involved in issuing illegal CNISs to afghan immigrants using fake signatures.

More than 400,000 Afghan immigrants are risiding in Quetta and they play a big role in deterioration of law and order situation in Quetta, said home secretary of Balochistan, Akbar Hussain Durrani.

Balochistan National Party has been raising voice against issuance of illegal CNICs to Afghan immigrants for a long time. The revelations made by one of NADRA officials have corroborated the claims made by BNP.

According to some analysts, the current revelations are just tip of the iceberg. Hundreds of thousands of illegal CNICs have been issued to Afghan immigrants in Balochistan.

Published in The Balochistan Point on 17th September, 2014.

2014-09-17
Editor
Previous: Mega corruption in Gwadar: Salaries paid to Workers of a Technical Institution without its existence
Next: Saudi royals flock in search of Houbara Bustards