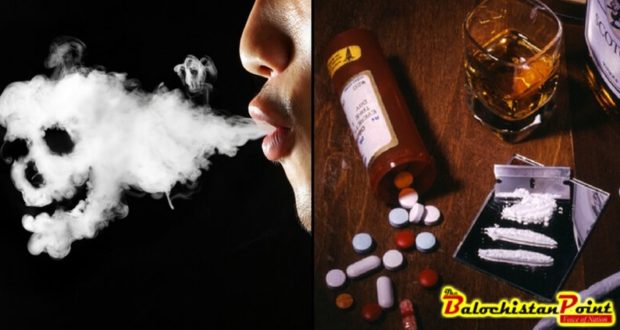 Sadly, Drugs addiction is surging at an exponential rate in our country. It has engulfed our people especially the young generation who are in the very flower of their youth. It has been observed that the students of schools, colleges and universities are more prone to drugs addiction than other members of the society.  It reflects that our youth that is our future is at stake.  Further, the impact of drugs addiction is so severe that it renders the addicts as useless part of the society. The youth who are addicted to drugs abuse therefore become unproductive for the society and lose their worth and esteem not only in the eyes of their family members but also in the society as a whole and what’s more is the untimely and pitiful death that is their ultimate destiny.

Factually speaking, in the last few decades, drug addiction has increased at an alarming rate in our country.  United Nations office on drugs and crime in its 2013 “Drug use in Pakistan” report released shocking statistics. It says that   Pakistan has 6.7 million drug users using different substances including plant-based drugs, medical prescription drugs, opioids, opiates and tranquilizers. Of these, more than 4 million are addicts, among the highest number for any country in the world. Abuse of Cannabis and heroin is rife in our country. UNDOC further estimates that more than 800,000 Pakistanis aged between 15 and 64 use heroin regularly. It is also estimated that up to 44 tons of processed heroin are consumed annually in Pakistan—a rate of use twice or thrice that of the America’s.

Moreover, in July 2015, anti-narcotics force informed the senate standing committee on interior and narcotics control that approximately 700 people in Pakistan die every day due to consumption of illicit drugs. But the irony is that in utter disregard to the sensitivity of the situation, the federal budget 2017-18 allocated a mere Rs, 70 million as “National Fund for the control of drug use” as laid out in section 54 of the control of narcotics substances act (CNSA) 1997; it means that we spend merely Rs 11 per head on each drug addict.  It clearly shows the lack of seriousness on part of the previous government to deal with this highly sensitive issue.

What is more startling is the mounting trend of drug abuse in our educational institutes. According to one survey, 1 out of 10 college/university students is a drug addict and almost 50% students of different educational institutes particularly elite schools/colleges in Islamabad and Lahore are addicted to drugs, and majority of these students belong to elite class, having no issue of affordability.

Here, the question arises why our youngsters become victim of this lethal malady; what are the reasons that lead them towards this spiraling morass?

Here are some factors that constitute the cause of drugs addiction among the youth. According to one research, youngsters turn to drugs when they are depressed and they see these substances as a way to forget and feel happier. Stress is another factor that induces the youth to indulge in the drug abuse. Due to over load of work and atychiphobia pertaining to exams, the students encounter stress and they therefore use the drugs in order to relax. Peer pressure forms another reason of drug addiction among the youth. This peer pressure happens most often between the ages of sixteen and eighteen when teenagers think “every one else is doing it” so we should too. Curiosity constitutes another major factor that prompts the youth to take drugs. They begin experimenting with drugs simply because they are curious and want to know to know what it feels like. Low self-esteem is another big cause of drugs addiction among the youth. In teenagers, especially between the ages of fourteen and sixteen, low self-esteem due to physical appearance or lack of friends can lead to self-destructive behavior. The family put pressure on teenagers to act and look a certain way and they lose confidence in themselves if they don’t meet those high standards. Use of drugs therefore seems like an easy way to escape to escape this reality.

Another interesting cause of drugs addiction among the youngsters exclusively the females is their strive to reduce weight. Female teenagers are often inclined to consume drugs such as cocaine—for a quick way to lose weight. During high schools especially, young girls become more body –conscious and may become desperate to slim down. Thus, they find drugs as the quick antidote to do so. The genetics can also be one of the additional cause of drugs addiction, if there is a family history of the drug addiction or alcoholism; the youth may be genetically predisposed to experiment with drugs and alcohol and become addicted.  Finally, the ease of availability of the drugs in every nook and corner of our country also facilitates the drug abuse. There are multiple evidences that the contact numbers of drugs dealers and agents are also widely distributed throughout the hostels, hotels and other places. Thus, the drug dealers and their agents are just a phone call away. To add, the drug cartels in Pakistan are fully backed and supported by the bigwigs of the society who work in collusion with police.

Given the gravity of the situation, a national action plan is inevitable to arrest the proliferation of the drugs abuse in our country after all; this is the matter of our future. To this end, we must educate our people through curriculum or otherwise both that how detrimental it is for us to consume drugs as well as to change our perspectives about how and why, scientifically, is it difficult to quit drug consumption once it is pursued.

Furthermore, for those who are the victims of this social scourge (drugs addiction) should not be treated as pariah rather arrangements for their proper treatment and rehabilitation should be prioritized.  The provincial governments, in this regard, are not only mandated under section 52 of CNSA to register all drug addicts for the purpose of treatment and rehabilitation but also to “establish as many centers as deemed necessary for de-toxification, de-addication, education, after care, rehabilitation, social integration and for the supply of such medicines as are necessary for the addiction of the addicts” in section 53.

Moreover, the loopholes in the criminal justice system that provide opportunities to the drug traffickers to evade the justice need to be removed and the stringent punishment like that of Saudi Arabia where the penalty for drug smuggling is death should be introduced so that we could save the life of our loved ones and thereby create a drug free society.

To cap it all, the drugs addiction among the youth is killing them morally, socially, psychologically and even physically. This very situation warrants an immediate plan to save the lives of our youth. Therefore, if there can be a national action plan against terrorism, why can’t be one there for this national affliction that kills our people far more than former.

The writer is a legal practitioner-cum-columnist based in Quetta Balochistan.

Published in The Balochistan Point on January 23, 2019