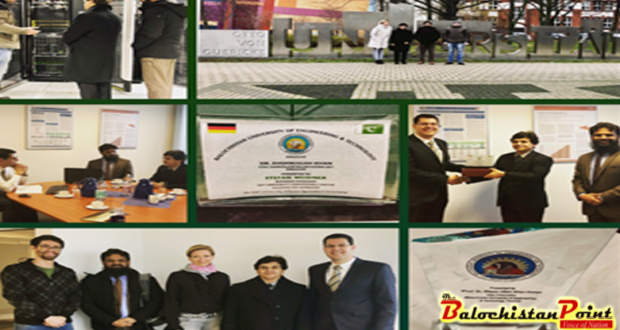 Balochistan University of Engineering and Technology, Khuzdar(BUETK) under the intellectual and dynamic leadership of the revered Vice Chancellor Dr. Ehsanullah Khan Kakar is on the zenith of new heights.

Dr. Ehsanullah Khan Kakar is renowned in the educational circle, due to his scholarly work and support for academic excellence in the province. After joining BUETK he placed tangible evidence of fostering diversity affirmative action and equal opportunity for all students, faculty, and staff in general.

Recently the Vice Chancellor signed a Memorandum of Undertaking with SAP University Competence Centre Magdeburg, Germany. During the signing ceremony of said MoU, SAP agreed to launch its first Next Generation Lab in Pakistan at BUETK.

The signed MoU will not only be fruitful for BUETK but all sister universities as Mr. Stefan Weidner CEO, SAP has planned to visit Pakistan to take other Universities on board. The German team of SAP will also train 20 faculty members of BUETK in “Train the Trainer” Program in the first phase of said MoU.

Dr. Ehsanullah Khan with astute leadership and relationship building skills, an enduring legacy by responding to these opportunities and challenges no doubt that the only engineering university of Balochistan will very soon chase new heights of academic excellence in the country.