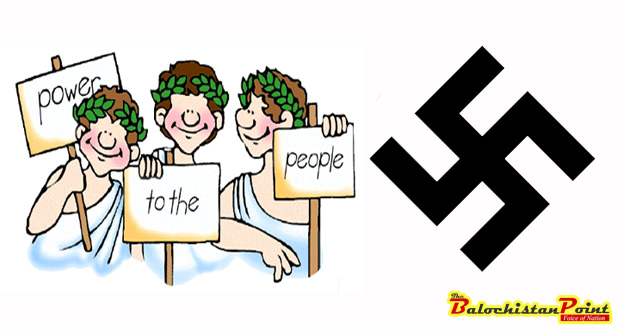 David Irving, the writer of Hitler’s Wars, faced deportation from Australia because he tried to counter the mainstream narrative: Hitler, authoritarian and anti-Semitic, was the sole architect behind the pogroms and carnages targeted against Jews, named Holocaust. He denied this. It must be noted that it was the democratic setup of governmental system in Australia that manifested that much dearth of acceptance for counter-narrative.

Ernst Rohm, Hitler’s contemporary, mustered courage to point fingers on some of Hitler’s policies and the resultant fate was The Night of Long Knives: A plan to muzzle dissent by ruthlessly butchering the dissenters. Like Irving, Rohm also erected stumbling-blocks in the promulgation of well-seated narrative.

Anything that runs slightly athwart marginal interests of the power coterie gets either censored or concocted to make it stink. This is the definition of Nazism and the same seems the case with contemporary democracy.

Joseph Goebbels, Hitler’s Propaganda and Public Enlightenment minister, was tasked to shape pro-Hitler narrative and for that, with his crew, Goebbels maintained strict surveillance on public discourse. In addition to this, all German newspapers did pro-Nazi canvassing and solicitations.

On the other hand, in contemporary democracies, the same has become the fate of almost all media tools and education institutions. All major newspapers of US and West perpetually employ state-forwarded phrases and capitalist-driven innuendos. The term “collateral damage” has been stretched to the hilt in western newspapers to minimize atrocious crimes perpetrated by NATO in coalition with US.

Chomsky and the whole world severely decried human right violations and assaults on hospitals during the invasion of Iraq but the Western media termed it “collateral damage”. And again, Paulo Freire’s magnum opus” Pedagogy of the Oppressed” was denied acquaintance among the students of leading Western universities only on the basis of the word ”oppressed”. They demanded it be supplanted by “disenfranchised” as it serves the same purpose and also not the catchphrase of communists. After being cognizant of the causes that incarcerated the oppressed in the fetters of oppression, for sure, they would initiate wringing the neck of the cause— the Oppressor. Linguistically, disenfranchised has its noun as disenfranchisement and, hence, no direct or pointed indication of the oppressor— the Capitalist.

The Harvard School of Education, and many other institutions like this, does not offer Fereire’s contributions in its syllabus of graduate and postgraduate courses of education and this is tantamount to doing graduation or post-graduation in linguistics without studying Chomsky, says the educationist Donaldo Macedo.

The point of difference is Nazis explicitly shrugged dissent and opposition off by marauding it, whereas, the democrats, rather capitalists as they are at the helm of affairs, implicitly choked it through intellectual means.

After 9/11, there was an omnipresent cacophony: Why us? This was the question asked by American public, exposing naivety, writes Irfan Husain in the book Fatal Faultlines. The policy makers served business magnates, and pursued hawkish policies epitomized in the form of Iraq invasion. The media, like Nazis Propaganda and Public Enlightenment ministry, controlled public mindset with the connivance of analysts and educationists.

Teetering on the verge of fatal defeat in Moscow, Hitler kept assuring Germans that everything was hunky dory that Wehrmacht was successfully on its blitzkrieg. On the other side, funneling billions of dollars in the pockets of dictators in the Middle east, US affirmed the grassroots that the sole purpose was to uplift those in ghettos and slums, and that to present US as the messiah.

Democratic West, America included, need to do soul-searching and backtrack to the solemn pledges: the pledge to resuscitate the plebs; the pledge to stand for territorial autonomy; the pledge to denounce violence; the pledge to refute apartheid laws and apartheid treatment meted out to few communities. If they procrastinate in redefining, then it would be difficult for the people of common wit, like me, to discern between Nazism and Democracy.

Published in The Balochistan Point on May 28, 2015