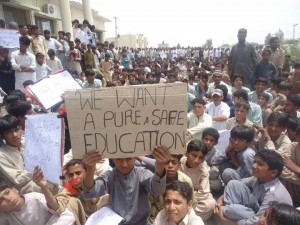 Panjgur is known  for being  peaceful and education  lightening  district  of  Baluchistan, however, it  has been  under  the  sufferings  of  opprobrious  problems  of peace  destructions. Before recovering from critical hurdles, it has been made to face forced abandonment of its all private schools after receiving threats by armed group calling itself  Tanzeem-ul-Islam-ul-Furqan.

The   threats  given  by  the  organization  has  made  all  the  private  schools  closed for  a  long,  which is a major issue for the region.  Such activities against   education   are  making  every one  believe  that   it  is  the  beginning  to  eradicate education  of  girls.  As the private  schools   are  the  only  basic  source  of quality  education  in  Panjgur.

However, the main reason of   Tanzeem-ul-Islam-ul-Furqan is to stop girls from getting education  because   considering  themselves  true  followers  of  Islam  are  doing  opposite  to  Islamic doctrines. Rather  Islam  says  “education  is  must  for  every  men  and  women”. As  we  know  educating  a girl  means  educating  a  nation ,if  the  entire  nation is  educated  then  everyone  will  be  in chips  not in trouble.

Media organizations despite being  the  only  voice  of   people  have  been  utterly  silent  on  the issues  of  Panjgur.  Local leaders are also unable to play any significant role for defending girls’ education in the area. Both Media and political leaders have spots on the matter  of  Panjgur  education.

Published in The Balochistan Point on May 25, 2014