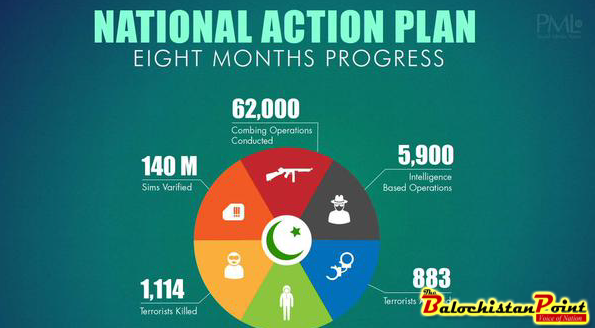 No progress on NAP in Balochistan

Islambabd: There has been little or no progress on a Balochistan-specific vital point of the counterterrorism National Action Plan (NAP).

Point 17 of the NAP says the Balochistan government will be “fully empowered for political reconciliation with complete ownership by all stakeholders”.

The comprehensive details of implementation of the NAP points projected by the federal government are also silent on the key element relating to Balochistan. However, its execution is indeed a difficult task because the other side is too hardened and linked to foreign players, hostile to Pakistan, and can’t take any independent decision.

There are also other power centres in Balochistan because of its peculiar security situation, mainly caused by sabotage and terrorism. In addition, the Commander of the Southern Command and law enforcement agencies including the Frontier Corps are extra vigilant in view of the extreme importance of Balochistan for having crucial parts of the China-Pak Economic Corridor (CPEC) specifically the Gawadar port.

Even the NAP point stressed that all the stakeholders will completely own the full empowerment of the Balochistan government for political reconciliation.

Such reconciliation obviously relates to initiation of talks with disgruntled Baloch elements, who are operating against Pakistan from abroad, dancing to the tunes of India and forces inimical to Pakistan. Some of them particularly the grandsons of slain Nawab Akbar Bugti preferred anti-Pakistan agenda after the assassination of his elder in a military operation in the Kohlu mountains on August 26, 2006 during Pervez Musharraf’s era.

Later, Brahamdagh claimed that he talked about the Balochistan issue with the chief minister but said that Dr Malik has no authority to discuss the all-important matter with him.

“Even my late grandfather had never rejected the option of dialogue but those who are authoritative enough to change the situation should come forward and negotiate,” he was quoted as having stated.

After that, there has been no known contact between any top political figure of the Balochistan government with the estranged Baloch elements, living abroad. This clearly shows the official indifference to the significant point of the NAP.

However, Commander of Southern Command Lt-Gen Aamir Riaz recently indicated the Baloch insurgency has all but ended, and that the nation would hear the ‘big news’ within two months when he was asked about the prospects of return of the self-exiled Baloch leaders.

In his Independence Day address at Ziarat, the general asked the misguided elements to come back and said Pakistan has a big heart to embrace them. This was an open offer that has not so far been responded by the concerned elements.

The lack of progress in the secret dialogue process also became evident when Brahamdagh supported an obnoxious statement of Indian Prime Minister Narendra Modi on Balochistan, which was meant to distract world attention from the freedom movement and the Indian atrocities in the occupied Kashmir.

Chief Minister Sanaullah Zehri is supposed to conduct the fresh dialogue, if any, with the discontented Baloch young men for being the political face of Balochistan. While reacting to Modi’s harangue, he said three days ago that the Indian government fully backs the ongoing insurgency in Balochistan and is deeply involved in sponsoring elements like Brahamdagh Bugti, Haerbyar Marri, Zamran Marri and Allah Nazar, and that Brahamdagh was getting funds from Indians, that’s why he (Brahamdagh) supported Modi’s statement.

Modi had made a wild claim that people of Balochistan, Gilgit and Pakistan occupied Kashmir have thanked him a lot in past few days and he was grateful to them.

It was speculated after Malik’s meeting with junior Bugti that Brahamdagh was months away from returning to Pakistan, marking an end to his nine-year exile which had followed the killing of Nawab Bugti. It has not happened.

It was also claimed that they reached an agreement on 90 per cent of the issues and two or three more meetings will be held to firm up the accord.

After Bugti’s killing, Brahumdagh is said to have fled to Afghanistan from where he flew to Switzerland, some say on an Indian passport, to seek political asylum. (Courtesy: www.thenews.com.pk)

Published in The Balochistan Point on August 21, 2016