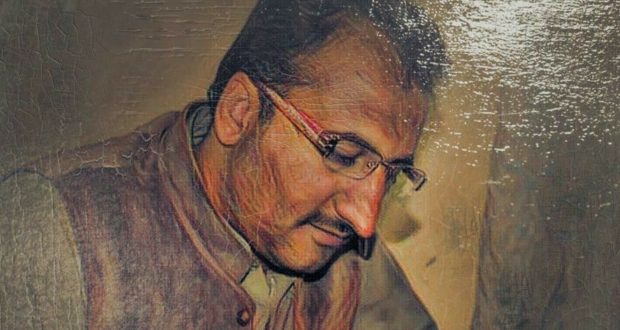 The graveyard of my town is situated in the half way of bazaar. When I am willing to go to bazaar on foot, I must stay at, and pray for my dead elders and also raise my hands, in the intention of praying, For other dead people. Suddenly, it came to my mind that it is better to mark a place, for my grave, near my mother’s grave.

Second day, I went to the graveyard with this intention. Naturally, at that day I had a friend with me as well. Though, I told my intention to my friend, but he disliked it. He became mad at me and strictly said “at first, it is religiously prohibited and second, why you intent like this? It is a sin. May Allah Almighty protect you, May Allah Almighty grant you a long life, do not even think like that, man. I calmly replied ” oh fellow, do you know that death is the only truth of the whole world, death is real, if there is life, there is death. But he angrily raised his hands and said “oh that’s true and nobody denies of this, we are standing in this burial site, do you know, how many people are under the soil, all were alive at some time. They had wishes like me and you. They had families, relatives, wives, even they had each and everything that a living person can possess. But I think, none of them had marked their own graves location in their lives.” I replied ” oh brother, why you are turning my point? The truth is, there is lack  of place for graves, and there are people who have been marked their own graves site in this cemetery”. I grab his hand and seen him likewise places, where living people have successfully digged their graves. I said ” I just only want a piece of land near my mother’s grave, I neither want to die before my time, nor I’m thinking or intending anything else.” He became speechless and slightly said ” if you are so fond of dying then lie down here”. I laid down near my mother’s grave, and he took a stick from graveyard and start drawing a line around me. After doing so, he said ” now stand up, and congrats you did what you wanted to, we drawn your grave’s site, now go back to home”. I replied ” look mate, I would like to bring a sharp spade with a blade and start digging my grave from now, what you think”? He exclaimed with sorrow ” oh please dear, do you have anything else to do or not? You were a busy person and certainly you are, but from where did you got these nonsense thoughts that find a grave and dug a grave!

Oh man, if you are really willing to dig graves then why don’t you join grave diggers of our town? Indeed, it is humanities service and good deed as well. And I’m not going to be a part of your nonsense thoughts, so spear me, if u say a word anymore, I’ll erase my own drawn line too.”

We were in discussion and suddenly two persons arrived on bikes and said ” is it all good that you people are here in graveyard? Is anybody died? I replied ” no brother, we are here only for praying purpose, all is good and thank you for your kindness”. They heard me and left. I really appreciate this kindness or sympathy of my town’s people. If they heard about someone’s death or they saw people in cemetery, they surely come for helping in large gatherings without any kind of discrimination, whether the dead is poor or rich, old or young, and whether is it night or day, cold or warm, raining or snowing, they just want to help in digging graves.

Well, that day I have been denied by my friend and then we went to bazaar. ” should I dig up my grave or not… “. I could not cope up with this matter and I have been failed to erase this thinking. Tomorrow’s morning, I went to cemetery all alone with a sharp spud and blade. I started digging that drawn place. When people saw I’m digging a grave, they came and helped me without asking who was dead? I think they thought someone has been dead! After a series of hard work, we completed the grave. I was happy that I have dugged my grave in my life, who knows how it will be after my death? There is a saying that if you are too busy in a work at day, you will have dreamed of it at night. That is what happened to me. I dreamed that I’m dead, people are crying loudly over my dead body, there are people who hated me and my doings, those people are saying ” how a good person he was, he was a well-wisher of the community, he was really kind to everyone, he was a sign of tolerance and forgiveness,

how many books he has written, he was one in thousands, he did not leave us only, he left from all the community, he was certainly good to poor, his kind of persons only born in centuries, he reached at this position after a very long way. I saw there is a huge event of respect for me, some of my friends are crying so loudly, some of them were saying that we have to manage an event for his works, it is necessary to pay tribute to him. There are crying people who does not likes me in my life, even a little! But I’m completely aware that if a person gone from this world, he only gone from himself, only his family deprived of him, others will barely remember him for two days! Well, they took me with a lot of grieves and dumped me into my own handed made grave. Oh Yes, there was a crowd at the graveyard as well, there were people, who do not turn their faces to Kabah, in my last prayer. People were happy at this point and were saying ” oh, look at this kind-hearted person, who was aware of his death and he made his grave in his hands before his death.” But after losing me into the soil, there were none of them present at my funeral, none of them attended my last three days funeral. I was all alone at my funeral!

Published in The Balochistan Point on March 28, 2020