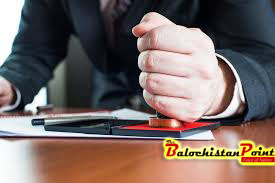 According to the details   spokesperson of GTA said in its statement, “We condemn the passed bill of Balochistan cabinet that all teachers who are in service must verify their education documents.”

“We will not verify our documents with our own expenses. No doubt, it will take a huge amount for verification.” says spokesperson of GTA

He added that asking service teachers for verification of their educational documents in fact is a fiction. Bureaucrats are always involved in making conspiracy against the teachers.

He said that GTA Balochistan has a clear stance that every plot against respected teachers will be made unsuccessful.

“Bureaucrats and minister should bear in their mind that it is just because of teachers today you are on the high rank of posts. Instead of paying tributes, they are undermining the prestige and dignity the teachers.” He added

Published in The Balochistan Point on February 10, 2016

2016-02-10
admin
Previous: We Would Not Accept Population Census in Presence of the Afghan Refugees: Kabir Muhammad Shahi
Next: Gwadar: RCDC Continues the Legacy with Third Annual Book Fair