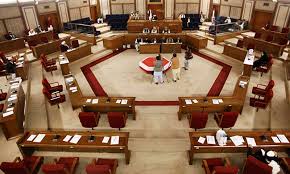 QUETTA: Opposition Leader in Balochistan Assembly and leader of Jamiat Ulema-e-Islam (JUI-F) Maulana Abdul Wasay while expressing his deep concerns over provision of 5000 acres land to central government for Gadani Power Park Project said that the house was not taken on board in this regard.

“Same history of Sui will be repeated once the project is executed as the power generated from the plant would go to Punjab and we will be facing the brunt of environmental degradation,” he raised this issue in a point of order in the session of Balochistan Assembly that met with Speaker Jan Muhammad Jamali in the chair, here on Saturday.

He recalled that when the gas was discovered from Sui after many decades pipeline was brought to Quetta and the same story would be of Gadani mega power project. “It has been said on the part of provincial government that it has given the land for project but the reality is that federal government grabbed the land,” he remarked.

JUI-F leader said that they should take serious such mega projects before handing them to others if not we would face same issues that we faced in shape of Saindak and Reko Dik projects. “We are spending millions of rupees in international courts on Reko Dik project and if Gadani project is not tackled seriously keeping the interest of the province on top we would be in great loss,” he cautioned.

He said that in other parts of the world power projects ran by coals were being disbanded due to their negative impacts on environment but it was being started in Balochistan.

Abdul Rehman Kethran from opposition benches said that generating power from coal had its serious health hazards and it would widely disturb marine life as well if proper planning was not made to control its environmental impacts.

Responding to the point of Opposition Leader, Mr. Ahmed Ali, leader of PML-N hailing from treasury benches conceded that there were many reservations over Gadani project, including that of allocation of 5000 acres land.

He said that according to the constitution of the country the area people should be benefited first from the project, adding that three transmission lines would be ejected from this power house, two for Punjab and one would come to Khuzdar. “It is also being pondered that how much it would affect marine life and this is the duty of provincial and federal environmental departments to work on it,” he said.

He said that a steering committee had been formed to look after the issue of provision of land, adding that the government had not sold its land rather the land had been allocated for project on rent.

At this, Speaker directed formation of committee, incorporating ministers and official concerned to oversee the allocation of land, environmental impacts and other related grievances.