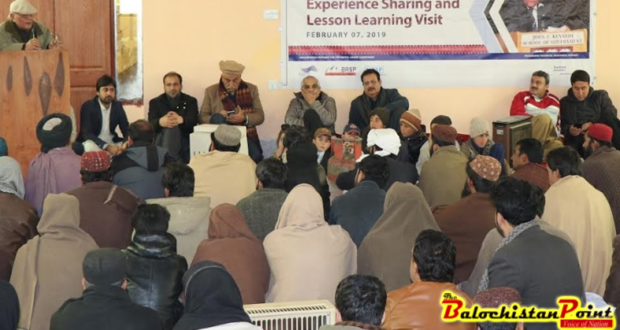 QUETTA: “The target of poverty reduction at household level can be achieved once the rural communities get organized at grassroots level. RSPN is a network of eleven Rural Support Programs (RSPs) including BRSP, working on poverty alleviation in 145 districts with overall outreach to 45 million population,” said Shoaib Sultan Khan the chairman of Rural Support Program Network (RSPN), while addressing to the participants of a community dialogue, organised by Balochistan Rural Support Program under European Union funded Balochistan Rural Development and Community Empowerment program here in Pishin district. A large number of community members, RSPN CEOs, NRSP, local organizations members and journalists.

Chairman RSPN Shoaib Sultan Khan termed the poverty a household level phenomenon and said that the potential to existing poverty at household level lies in the hands of communities, if they get organised to harness their individual and collective potentials, under the approach of the three-tiered social mobilization for community driven development.

“The communities should play an active role for the development, so their issues could be address at household level,” adding the communities must avail the opportunity to get themselves organized under the ongoing BRACE program. He urged.

He also emphasized linkages building between the communities and the government authorities and stressed upon the need for close coordination among the political, administrative and the social pillars of the society.

Highlighting the RSPs approach to bridge the missing links of development in the country, he said that community institutions work as the social pillar to supplement and complement the political and administrative pillars of the state. He added that with the support of the federal and provincial governments, these institutions fostered through RSPs’ proven three-tiered social mobilization approach to community driven development. While becoming part of the dialogue, the community members took keen interest in the discussions and shared their issues and challenges with the chairman. Their response was very positive and they agreed to enter into terms of partnership with BRSP for getting themselves organised under the EU funded BRACE Program, being implemented by the Local Government and Rural Development Department, Government of Balochistan. The community dialogue was followed by a session on lesson learning workshop attended by the higher management of the RSPN, BRSP, NRSP, representatives of the local governments and the district implementation teams of the BRACE Program.

Published in The Balochistan Point on February 15, 2019