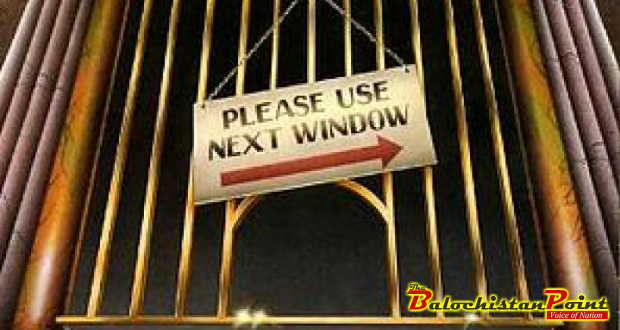 Since the inception of Pakistan, bureaucracy – along with civilian leaders and military – has always been a major player in the power structure. Bureaucrats like Malik Ghulam Muhammad, Chaudhry Muhammad Ali and Ghulam Ishaque Khan occupied offices of Governor General, Prime Minister and President respectively. However, the role of bureaucracy and the bureaucratic structure as a source of problem has mostly been ignored. Especially in Balochistan’s case, the outdated bureaucratic structure is one of the reasons behind the province’s plight.

Over 75% budget of Balochistan is used up by non-development expenses. Perks and privileges of bureaucrats make up a significant share of that non-development expenditure. Despite that, bureaucracy as a whole is a stumbling block for any positive step in most of the cases. In fact, it’s due to this bureaucratic structure that Balochistan has not been able to take full advantage of the provincial autonomy granted in aftermath of 18th amendment.

A few days back the students of Government Girls Primary School in Killi Shahnawaz Sariab area of Quetta were forced out of the building as the government had not paid its rent. After this issue was highlighted by the media, the government explained that amount of Rs. 2.7 million, as the grant for the school’s rent, had been approved last year but funds have not been released yet. This is just a tiny example of how the bureaucratic structure is hurting the people of the province.

The first reason for the problems in bureaucracy is that it’s outdated in nature. Most of the rules and regulations of bureaucracy in practice today were drafted in the colonial era. British Raj made those rules to govern their colonial subjects. Today the same rules are being used for governing citizens of a sovereign country.

Mr. Mahfooz Ali Khan, former Secretary Finance of Balochistan and an expert on bureaucratic matters agrees with this assertion. He says that bureaucratic rules are not compatible with modern day requirements.

The second reason that bureaucracy has become a menace in the province is the prevailing corruption in the institution. There are numerous examples where bureaucrats coming from middles class families ended up becoming billionaires due to unchecked corruption opportunities available to them. Along with politicians, bureaucrats in Balochistan are a major beneficiary of resource exploitation, especially after the 7th NFC award. In most cases, bureaucrats exploit the loopholes in the system to get away with their corruption. For instance there is no planning manual in Planning and Development Department of Balochistan. Bureaucrats use their discretion in planning related decisions and embezzle the funds in the process. The same bureaucrats resist efforts to prepare the planning manual because that would close the doors of corruption for them.

The fourth reason is related to the incompetence of lower level bureaucrats and staff which are recruited directly by departments. Most of these people are completely unfit to perform bureaucratic duties due to their incompetence and lack of required skills. A well-placed source within Civil Secretariat told this writer that a former Additional Secretary of an important ministry didn’t know how to write a summary. This speaks volumes about the incompetence of bureaucrats in the province. How can one expect such bureaucrats to draft and implement policies that would bring the needed change in the province?

In short, bureaucrats of the province along with their political patrons, are looting the resources of the province without contributing anything meaningful for the province at large. In fact, human development indices in Balochistan are inversely proportional to the increase in perks and privileges and fortunes of bureaucrats and politicians respectively.

At the moment there is a dire need to bring reforms in the bureaucratic structure. First of all the unnecessary red tape should be cut down to as minimum as possible. Secondly, rules and regulation governing the bureaucracy should be updated and made compatible with 21st century requirements. Thirdly, reforms are needed to eliminate every possible loophole in the system which can be exploited by bureaucrats. There are plenty of experts available in Balochistan who can assist the government in reform process if government shows the resolve and willingness for this herculean task.

Successive governments in Balochistan have failed to harbor the thought of reforming bureaucracy because they use the same institution for implementation of their illegal orders. Therefore, it’s also in the interests of the political class that bureaucracy remains corrupt and incompetent because then they can use it to pursue their vested interest.

The incumbent Balochistan government hasn’t bothered to make any headway in this regard either. Dr. Malik Baloch and company, like their predecessors, are not interested in reforming bureaucracy and providing relief to masses. If bureaucracy is not reformed then there is no way the problems of Balochistan can be solved even if the insurgency ends.

Published in The Balochistan Point on October 4, 2015